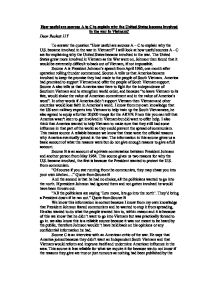 How useful are sources A to C to explain whv the United Statesbecame involved in the war in Vietnam?

The information in this source gives us a basic account of what the reasons were but do not give enough reasons to give a full account. Source B is an account of a private conversation between President Johnson and another person from May 1964. This source gives us two reasons for why the U.S. became involved, the first is because the President wanted to protect the U.S. from communism. "Of course if you stat running from the communists, they may chase you into your own kitchen...." Quote from Source B And the second is that he had no choice, all the politicians wanted to go into the north. If president Johnson had ignored them and not gotten involved he would have been thrown out. "All the politicians are saying 'Lets move, lets go into the north'. They'd bring a President down if he ran out." ...read more.

This information is not reliable enough because the critic seems to have a bias opinion of the reasons for America joining the war. America's involvement in the war grew and grew so much that they could not detach themselves from it. America offered support to South Vietnam, trained people to fight and , supplied them with money and weapons. The involvement grew until they eventually ended up sending their own troops in which they had not planned to do. Sources A and C are very useful for explaining America's reasons for getting involved when combined. They give you most of the reasons why they became involved and we know that the reasons it gives are correct because we know that from our own knowledge. Source C however is less useful for explaining why America got involved in the war because there is no evidence to support the reasons that it gives. It is also less reliable because the critic who wrote the source seems to have a biased opinion about the war making it less reliable and therefore less useful. ...read more.