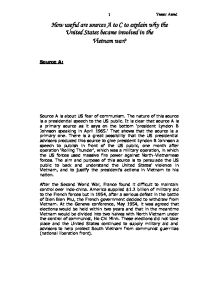 How useful are sources A to C to explain why the United States became involved in the Vietnam war?

How useful are sources A to C to explain why the United States became involved in the Vietnam war? Source A: Source A is about US fear of communism. The nature of this source is a presidential speech to the US public. It is clear that source A is a primary source as it says on the bottom 'president Lyndon B Johnson speaking in April 1965.' That shows that the source is a primary one. There is a great possibility that the US presidential advisors produced this source to give president Lyndon B Johnson a speech to publish in front of the US public, one month after operation 'Rolling Thunder', which was a military operation, in which the US forces used massive fire power against North-Vietnamese forces. The aim and purpose of this source is to persuade the US public to back and understand the United States' violence in Vietnam, and to justify the president's actions in Vietnam to his nation. After the Second World War, France found it difficult to maintain control over indo-china. America supplied $1.2 billion of military aid to the French forces but in 1954, after a serious defeat in the battle of Dien Bien Phu, the French government decided to withdraw from Vietnam. At the Geneva conference, May 1954, it was agreed that elections would be held within two years and that in the meantime Vietnam would be divided into two halves with North Vietnam under the control of communist, Ho Chi Minh. These elections did not take place and the United States continued to supply military aid and advisors to help protect South Vietnam from communist guerrillas (national liberation front). On August 2nd 1964, North Vietnamese torpedo boats attacked the US destroyer Maddox. The United States government retaliated by bombing North Vietnamese naval bases and oil refineries. In March 1965, president Lyndon B Johnson started sending troops to South Vietnam to protect a government that appeared to be in danger of falling to the national liberation front. ...read more.

He believed that the United States did not want an independent South Vietnam that was no longer dominated by America. He also believed that the US feared that South Vietnam might be able to reform and improve itself and develop its economy the US feared that because they wanted to dominate and control the south. This source contains information on what Noam Chomsky thought about the war in Vietnam. It shows what he believed on why the US got involved in the Vietnam War. It also shows that professor Noam Chomsky did not like the US's actions in Vietnam. Some historical questions could be raised from this source, like: * Why did the US get involved in Vietnam? * Why did America fear independence of South Vietnam? This source is an objective source as it shows both sides of the conflict, the US's and Vietnam's. It shows a lot of emotions of professor Noam Chomsky as he is trying to get his point of view across to other people. This source is quite reliable as it is objective and also quite true! This source is a very useful source to explain why the United States got involved in the Vietnam War. Conclusion: Sources A to C are quite important to explain why the united states got involved in the war in Vietnam as they show different reasons and point of views for the matter. Did the power of television force the United States to leave Vietnam? (Sources D to L) Source D: This source is a North Vietnamese poster produced and published during the war. It shows the problems faced by the Americans fighting a guerrilla war. This poster presents a particular point of view of how the Americans struggled to fight guerrilla fighters and how they found it difficult to bring in fresh supplies of ammunition and other necessaries. This poster is intended to influence Vietnamese people into thinking that the Americans are getting defeated and look confused. ...read more.

The people demonstrating are trying hard to get their message of anti-war across to higher authorities. Source J was published in a school textbook in 1970, after the end of the war. For this reason, the source would have had no influence on the war decisions, as it would have been over however it would have had a slight impact on the war decisions at the time of the war. Source J doesn't agree with the set question of Did the power of television force the United States to leave Vietnam? However it does show the commitment of the American public against the war. Source K: Source K is a public opinion poll asked in Australia during 1969-1970 (Australia fought alongside America in the war in Vietnam). The public were asked if they wanted their forces to continue fighting in Vietnam or be brought back home. I think the Australian government organized this type of poll so that they could find out public opinions on the war. The results of the poll would have probably been published in a newspaper. Source K is an Australian factual opinion. However it would have no impact on American decisions on the war. This source could have easily been tampered with so the results probably correspond well with the producer's opinion. The source shows that in 1970 50% of the voters wanted to bring their forces back home. This shows that there is a majority against the war, it also means that producer probably had a negative view on the war. Source K does not provide me with enough evidence to prove that the power of television forced to United States to leave Vietnam. Conclusion: The power of television did force the United States to leave Vietnam, but only to some extent. There are plenty of other factors for the defeat of the United States in the Vietnam War. 1 Yasser Awad ...read more.