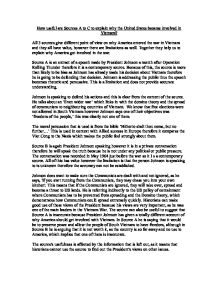 How useful are Sources A to C to explain why the United States became involved in Vietnam? All 3 sources give different point of view on why America entered the war in Vietnam and they all have value, however there are limitations as well. Together they help us to explain why America got involved in the war. Source A is an extract of a speech made by President Johnson a month after Operation Rolling Thunder therefore it is a contemporary source. Because of this, the source is more than likely to be bias as Johnson has already made his decision about Vietnam therefore he is going to be defending that decision. Johnson is addressing the public thus the speech becomes rhetoric and persuasive. This is a limitation and does not provide accurate understanding. Johnson is speaking to defend his actions and this is clear from the content of the source. He talks about an 'Even wider war' which links in with the domino theory and the spread of communism to neighbouring countries of Vietnam. We know that free elections were not allowed in South Vietnam however Johnson says one of their objectives was 'freedom of the people,' this was clearly not one of them. ...read more.

President Johnson doesn't mention why he wants to 'contain' Communism and why he does not like this system, which is partly because it means that the country cannot be as productive. In addition, he does not mention the Truman Doctrine or what his opinions are on it when he explains the only reasons they should go into war. This makes it less useful because historians will not be able to see whether Johnson thought it was worth sending supplies into Vietnam, because from what he says, he does not appear to think that Vietnam is a worthwhile country to get involved with. Johnson does not explain how he would feel about going into war against Vietnam if the Vietnamese caused a threat to America, other than the spread of Communism, like they did in the Gulf of Tonkin. Therefore, historians cannot justify whether he is saying Vietnam is not worth fighting for because they have been no real threat to America yet and whether he would actually change his mind if they became a threat. Johnson does not comment on why the public and politicians agree to get involved in Vietnam, which makes this statement less reliable because there is no evidence to back up this point. ...read more.

However, historians don't know what he is a professor of, and he could be a Professor of Science for example. Therefore he may not have studied the war in great depth, which makes the source slightly less trustworthy, and many US intellectuals were opposed to the war anyway so this source will not be as useful, as he will be making the same points as a lot of other US intellectuals. The source is trustworthy because Chomsky would have had access to more sources due to the interview being after the war. He will have been able to look at sources like a private conversation President Johnson was having, as well as photos of the destruction that was caused to South Vietnam. However Chomsky is anti-war and is known to be an extreme radical. Chomsky refers to these sources as being 'official' and includes quotes around the word, which might suggest they are not. Nevertheless there is same justification in believing that the USA were not just defending the South Vietnamese against communism but protecting its own interests in the Far East. Chomsky states 'The U.S. did not want an independent South Vietnam.' This is justified by the fact that South Vietnam did not have free elections. ...read more.