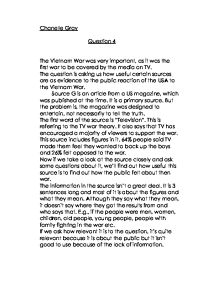 How useful certain sources are as evidence to the public reaction of the USA to the Vietnam War.

Chanelle Gray Question 4 The Vietnam War was very important, as it was the first war to be covered by the media on TV. The question is asking us how useful certain sources are as evidence to the public reaction of the USA to the Vietnam War. Source G is an article from a US magazine, which was published at the time. It is a primary source. But the problem is, the magazine was designed to entertain, not necessarily to tell the truth. The first word of the source is "Television". This is referring to the TV war theory. It also says that TV has encouraged a majority of viewers to support the war. This source includes figures in it. 64% people said TV made them feel they wanted to back up the boys and 26% felt opposed to the war. Now if we take a look at the source closely and ask some questions about it, we'll find out how useful this source is to find out how the public felt about then war. ...read more.

It doesn't mention what people said what and what age group they were in etc. The source was based on results from Gallup poll results but doesn't say what that is. It also doesn't mention how the votes were collected. If it were from a magazine, only some people would vote because not everyone reads magazines. If it were a TV vote, not many people would send in votes either. It is quite relevant because it mentions how that Vietnam was thought of the most important problem for around 3 years. It's also included the dates the Chanelle Gray Question has asked about and has said what was important then. I think we can trust it more than the previous source, but I wouldn't use it to find out information to write in a history book about Vietnam. There just isn't the right amount of information involved. Source I is a letter written by a US soldier fighting in the Vietnam War. It was written at the time. ...read more.

There was also a picture, which we don't get to see. There is quite a bit of information in this source, but as with the others, there are no figures and it doesn't mention how many people there were in the group of kids. I think that this source would probably be one of those sources, which makes the public oppose the war. The US was supposed to be protecting the innocent, not killing them. It has speech in it about what was said and it had a picture but it isn't actually shown in this booklet. I think that the source, which shows how the public reacted most to the war, is source H. I think this because the dates go with the dates the question mentions and also was a Poll that was taken. People thought that Vietnam was the biggest problem. I don't think the sources were very useful to the question because they miss out a lot of detail. I think that sources, which includes pictures or graphs, would be better to show how the US people felt about the war. ...read more.