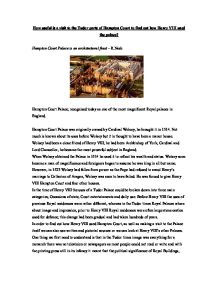 How useful is a visit to the Tudor parts of Hampton Court to find out how Henry VIII used the palace? Hampton Court Palace is an architectural feast - R.Nash

How useful is a visit to the Tudor parts of Hampton Court to find out how Henry VIII used the palace? Hampton Court Palace is an architectural feast - R.Nash Hampton Court Palace; recognised today as one of the most magnificent Royal palaces in England. Hampton Court Palace was originally owned by Cardinal Wolsey, he brought it in 1514. Not much is known about its uses before Wolsey but it is thought to have been a manor house. Wolsey had been a close friend of Henry VIII; he had been Archbishop of York, Cardinal and Lord Chancellor, he became the most powerful subject in England. When Wolsey obtained the Palace in 1514 he used it to reflect his wealth and status. Wolsey soon became a man of magnificence and foreigners began to assume he was king in all but name. However, in 1523 Wolsey had fallen from power as the Pope had refused to annul Henry's marriage to Catherine of Aragon, Wolesy was seen to have failed. He was forced to give Henry VIII Hampton Court and four other houses. In the time of Henry VIII the uses of a Tudor Palace could be broken down into three main categories; Occasions of state, Court entertainments and daily use. Before Henry VIII the uses of previous Royal residences were rather different, whereas in the Tudor times Royal Palaces where about image and impression, prior to Henry VIII Royal residences were often large stone castles used for defence; this change had been gradual and had taken hundreds of years. In order to find out how Henry VIII used Hampton Court, as well as making a visit to the Palace itself we can also use written and pictorial sources or we can look at Henry VIII's other Palaces. One thing we first need to understand is that in the Tudor times image was everything for a monarch there was no television or newspapers as most people could not read or write and with the printing press ...read more.

Unfortunately the Presence Chamber and Privy chamber no longer exist, all we can depend on are sources in order to find out its uses and how it would have looked. Originally the Presence Chamber would have been entered by a door which still stands there today at the far end of the Great Watching Chamber, through the Presence Chamber the rest of the King's state apartments including the privy chamber were accessible; however they were demolished. The Kitchens remain much the same as they would have been in the time of Henry VIII; today, they offer a glimpse into the working life of the Tudor Court. They can be seen at Hampton Court ready to prepare a meal and by seeing them we can fully appreciate the scale on which the meals were; one Tudor visitor described the kitchens as 'Veritable Hell' however today they are empty of people, cold and dark in contrast to the hustle, noise and smells of some 500 years ago. In order to feed the many courtiers who would often dine at Hampton Court the kitchens had specialist kitchens, these included pastry, spicery, pantry and confectionary. Tudor meals were often dominated by meat and so there would be a lot of effort made in the preparation of the meat as well as the rest of the food, this was of course in order to make a good impression and reflect the king's wealth. Source 5 shows just how much or a part meat played in the Tudor diet, in one year the Tudor Court ate, 1,240 oxen, 8,200 sheep, 2,330 deer, 760 calves, 1,870 pigs and 53 wiled boar. There were also areas of the Palace that contained what would be known today as Tudor propaganda. The Haunted Gallery owes its name to the story of the ghost of Catherine Howard that supposedly haunts the gallery. Before her marriage to Henry Catherine had already been in love with another man and 15 months into her marriage with Henry she was caught committing adultery with this man and arrested. ...read more.

lodgings for some of the servants and is still today much the same as it would have been in the Tudor times however some parts of the original Tudor building and d�cor have been lost or altered and so we can only deduce from the rest of the palace what they would have looked like. In order to be able to work out properly the uses of Hampton Court it is important that we take into account written and pictorial sources including plans, visitors accounts from the Tudor times and paintings as well as his other palaces as these can help fill in the gaps. A visit is useful to help see Hampton Court on a real scale, making the impression that is portrayed felt as you stand there in the Clock Court surrounded by architectural magnificence, much the same as it was in the Tudor Times, the ornate brick work, twisted chimneys and the beautifully intricate astronomical clock make it all more real and even today was can still appreciate just how impressive Hampton Court would have appeared to its Tudor visitors. There are also as mentioned previously guides dressed in traditional Tudor clothes and options such as audio tours where you can have each room explained in detail; if you're lucky you might see musicians playing old instruments. Hampton Court is not the only palace that were can get a sense of Tudor life, there are various other palaces such as Longleat House in Wiltshire, Hardwick Hall in Derbyshire, Richmond Palace, Westminster Abbey and Greenwich Palace. Personally I found the visit useful, as I was able to appreciate its magnificence more fully and helped me to experience and gain much the same impression that Tudor visitors would have got; it helped me to explain how Henry used the palace I do feel however that no amount of restoration can substitute the actual place in its Tudor period; it is void of the smells, noises and people that would have once been there. ...read more.