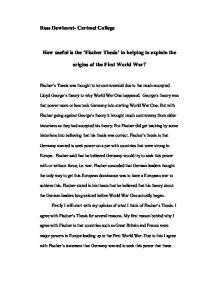 How useful is the 'Fischer Thesis' in helping to explain the origins of the First World War? Fischer's Thesis was thought to be controversial due to the much-accepted Lloyd George's theory to why World War One happened

Ross Dewhurst- Cartmel College How useful is the 'Fischer Thesis' in helping to explain the origins of the First World War? Fischer's Thesis was thought to be controversial due to the much-accepted Lloyd George's theory to why World War One happened. George's theory was that power more or less took Germany into starting World War One. But with Fischer going against George's theory it brought much controversy from older historians as they had accepted his theory. But Fischer did get backing by some historians into believing that his thesis was correct. Fischer's thesis is that Germany wanted to seek power on a par with countries that were strong in Europe. Fischer said that he believed Germany would try to seek this power with or without force, i.e. war. Fischer conceded that German leaders thought the only way to get this European dominance was to have a European war to achieve this. Fischer stated in his thesis that he believed that his theory about the German leaders long existed before World War One actually began. ...read more.

My next reason as to why I agree with Fischer's thesis is due to the fact he states that Germany had planned this long before the war began. I agree with this as I think that Germany, as stated earlier wanted the power of the likes of France but knew they couldn't attain this from them. So from them knowing this (Germans) I agree with Fischer that they planned this attack before they actually decided to go to war. My final reason why I agree with Fischer's thesis is that he states that the Germans were trying to make the British think they had been provoked by the French. I agree with this as the Germans held the British as a major super-power in Europe and a threat if they went against them in the war. By trying to make the British think the French started World War One instead of Austria they would join sides with the Germans and share the power that they had. ...read more.

Ritter criticised this immensely saying that how could there be similar plans between the two Reich's even though they were both similar to Nazi policies. The Germans thought that the surrounding countries, which it wished to gain control over, i.e. France and Russia, encircled them causing the Schlieffen Plan to be created. This plan was made in order take France out in the first six weeks of the war before Russia had time to react to this, as France and Russia were strong allies. With Germany hoping to do this it would enable them not to fight the war on two fronts being that if a European War came about they would have an easier chance of winning it. This plan failed when it came into action due to several troops being absent from the western front of field causing poor communication among troops allowing the French to locate their position. To conclude I agree strongly with the Fischer's Thesis in regarding to how World War One started, but it does have several weak points as outlined in this essay. ...read more.