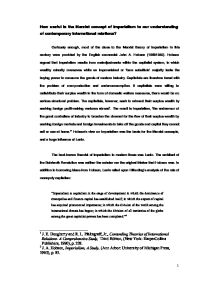 How useful is the Marxist concept of imperialism to our understanding of contemporary international relations?

How useful is the Marxist concept of imperialism to our understanding of contemporary international relations? Curiously enough, most of the clues to the Marxist theory of imperialism in this century were provided by the English economist John A. Hobson (1858-1940). Hobson argued that imperialism results from maladjustments within the capitalist system, in which wealthy minority oversaves while an impoverished or 'bare substitute' majority lacks the buying power to consume the goods of modern industry. Capitalists are therefore faced with the problem of over-production and under-consumption. If capitalists were willing to redistribute their surplus wealth in the form of domestic welfare measures, there would be no serious structural problem. The capitalists, however, seek to reinvest their surplus wealth by seeking foreign profit-making ventures abroad1. The result is imperialism, 'the endeavour of the great controllers of industry to broaden the channel for the flow of their surplus wealth by seeking foreign markets and foreign investments to take off the goods and capital they cannot sell or use at home.2' Hobson's view on imperialism was the basis for the Marxist concepts, and a huge influence of Lenin. The best-known theorist of imperialism in modern times was Lenin. The architect of the Bolshevik Revolution was neither the scholar nor the original thinker that Hobson was. ...read more.

Moreover, the greater the development of capitalism, the greater the need for raw materials and markets, and hence the greater scramble for colonies. The establishment of political control over territories overseas is designed to provide a dependable source of raw materials and cheap labour and to guarantee markets for the industrial combines of advanced capitalist countries.7 Lenin held that imperialist policies would enable capitalist powers to stave off the inevitable revolution, since conditions of the domestic proletariat would be improved by the exploitation of the working class in colonial territories. Writing in the spring of 1916, nearly two years after the outbreak of World War I (WWI), Lenin viewed the history of the previous generation as a struggle between the advanced capitalist powers for the control of colonies and markets. Capitalist countries have formed alliances for the exploitation of the underdeveloped areas. Especially in East Asia and Africa, the imperialistic powers have claimed territories and areas of influence. Such alliances are, however, breathing spells between wars, since the capitalist powers find it necessary to fight for control of limited overseas markets and raw materials. Because of the ultimate dependence of capitalist economic systems upon such markets and natural resources, international conflict is endemic in a world of capitalist states. ...read more.

The Andropov-Chernenko interregnum (1982-1985) was a transitional period of unstable leadership without precedent in Soviet history. From 1985 until the collapse of the Soviet union, the Gorbachev gave rise to a spirited debate throughout the West, before the collapse, as to whether glasnost (openness) and perestroika (restructuring) are harbingers of fundamental change in the Soviet world outlook, change that would so transform Lenin's ideological-political heritage as to be tantamount to abandoning it.10 The major critique of any Marxist concept, when applying them to contemporary international relations is the fact that the vast majority of Communist nations have fallen. Granted, communism was not totally based on Marxist theory, however it was its backbone. In conclusion, the Marxist concept of imperialism is partially usefull to our understanding of contemporary international relations in terms of a theory. All theories of international relations can cite examples from issues which arise in world affairs, equally, critics can cite examples where the reverse has occurred. The fall of the Soviet Union and other Communist regimes dispelled many of the Marxist views. One of the major critiques of the Marxist view is the fact that Lenin stated that imperialism was the highest form of capitalism. This view does not explain why a communist state, the Soviet Union, had Eastern European colonies of its own. ...read more.