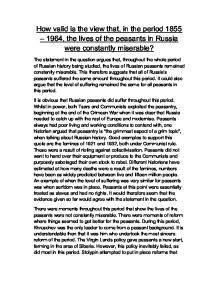 How valid is the view that, in the period 1855 1964, the lives of the peasants in Russia were constantly miserable?

How valid is the view that, in the period 1855 - 1964, the lives of the peasants in Russia were constantly miserable? The statement in the question argues that, throughout the whole period of Russian history being studied, the lives of Russian peasants remained constantly miserable. This therefore suggests that all of Russia's peasants suffered the same amount throughout this period. It could also argue that the level of suffering remained the same for all peasants in this period. It is obvious that Russian peasants did suffer throughout this period. Whilst in power, both Tsars and Communists exploited the peasantry, beginning at the end of the Crimean War when it was clear that Russia needed to catch up with the rest of Europe and modernise. ...read more.

It would therefore seem that the evidence given so far would agree with the statement in the question. There were moments throughout this period that show the lives of the peasants were not constantly miserable. There were moments of reform where things seemed to get better for the peasants. During this period, Khruschev was the only leader to come from a peasant background. It is understandable then that it was him who undertook the most sincere reform of the period. The Virgin Lands policy gave peasants a new start, farming in the area of Siberia. However, this policy inevitably failed, as did most in this period. Stolypin attempted to put in place reforms that would also help the peasantry, especially in agriculture. ...read more.

Having to deal with redemption payments and losing rights that serf's had to farm on the Mir's land. When grain requisitioning was introduced, starting initially under Vyshnegradskii. An important factor in the lives of peasants was the First World War. Peasants were sent into battle poorly equipped and inevitably led to slaughter. It is correct to suggest that suffering was a dominant factor in the lives of the peasants throughout this period. However, it appears that the level of suffering amongst all the peasants was not entirely the same, an example of this being the Kulaks. However, the Kulaks suffered when Stalin came to power as he saw fit to try and extinct the Kulaks as a race. There were brief moments of reform, although these very rarely came to something. Peasants did suffer, but the level varied throughout the period. ...read more.