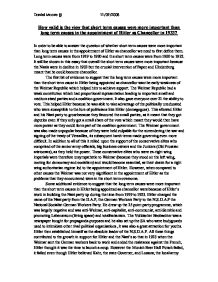 How valid is the view that short term causes were more important than long term causes in the appointment of Hitler as Chancellor in 1933?

Whom he replaced him with the more malleable Von Pfeffer and changing the role of the SA more towards propaganda. Therefore this is very important because although on the surface the Nazi party did not appear to be making significant process against a strong Weimar, it was crucially building a foundation from which Hitler would be able to achieve the chancellorship. One final reason why long term causes may be more important than short term cuases is because of Hitler's exploitation of circumstances arising from 1828 to 1830. As a consequence of an agricultural depression and the success of big business and their workers, two groups were caused to suffer; the agricultural workers and the Mittelstand (lower middle class). Hitler recognised this and so he targeted them to gain support with the help of the other NSDAP party officials making speeches to encourage the support of the agricultural workers, especially pointing out point 17 of the 25 point party programme, emphasising that it was not aimed at farmers but was aimed at Jewish land spectators promising to confiscate and re-distribute the land. Hitler as well as this also opposed the renewal of the Dawes plan, which was also unpopular amongst the German people as it reminded them of the humiliation of the harsh terms of the treaty of Versailles. ...read more.

So it can be seen that the short term political manoeuvrings of Hitler were most probably the most significant factors in his rise to power, as they brought about the chancellorship for Hitler when he his support had been declining. In conclusion it can be seen that through the thorough examination of all the different long term and short term factors that in Hitler's rise to power the short term factors were far more important in the appointment of Hitler as chancellor in 1933 as he would have been in decline had his political manoeuvrings not succeeded. However even though the short term causes without a doubt led to him becoming chancellor the long term causes put him in the position to be able gain the support he needed and have a strong foundation through the pyramidal structure of the NSDAP. The single most important cause in the appointment of Hitler as chancellor was the intervention of Papen as without him it would have been impossible to persuade Ribbentrop and Hindenburg and all the other conservative elites that Hitler was a good choice for chancellor. ?? ?? ?? ?? Daniel Moore (j) 11/09/2008 ...read more.