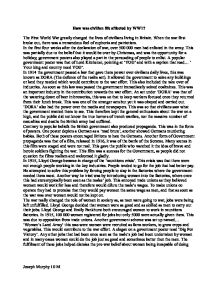 How was civilian life affected by WW1?

How was civilian life affected by WW1? The First World War greatly changed the lives of civilians living in Britain. When the war first broke out, there was a tremendous feel of euphoria and patriotism. In the first four weeks after the declaration of war, over 500 000 men had enlisted in the army. This was partially due to the belief that it would be over by Christmas, and was the opportunity for a holiday; government posters also played a part in the persuading of people to enlist. A popular government poster was that of Lord Kitchener, pointing at 'YOU' and with a caption that read... ' Your king and country need YOU'. In 1914 the government passed a law that gave them power over civilians daily lives, this was known as DORA (The defence of the realm act). It allowed the government to seize any buildings or land they needed which would contribute to the war effort. ...read more.

This crisis was that there were not enough people working in the key industries. People tended to go for the job that had better pay. He attempted to solve this problem by forcing people to stay in the factories where the government needed them most. Another way he tried was by introducing women into the factories, where once this had stereotypically been seen as the males' job. This annoyed trade unions as they believed women would work for less and therefore would dilute the male's wages. To make unions co operate they had to promise that they would pay women the same wage as men, and that as soon as the war was over women would not be kept on. The war really changed the role of women in society as, as men were going to war, jobs were being left unfulfilled. Lloyd George decided that women were as good and as skilled as men to carry out their jobs. ...read more.

Voluntary rationing was introduced in May 1917, but proved unsuccessful. So in 1918, compulsory rationing was introduced. This meant that people had to cut down on the amount of sugar, butter, meat and beer that they consumed. They managed to do this by giving everyone a book of coupons in which they bought food. Penalties were forced on those who broke the rationing rules. The First World War was the first war where Britons came under direct attack from the enemy. This was due to German bombers and Zeppelin warships. In 1915, German bombers bombarded Scarborough in which many innocent people had been killed. The government decided to use this to their advantage and encouraged people to avenge the attack on Scarborough by joining the army, yet again, here is British government propaganda. To conclude my essay I believe civilian life was greatly affected in World War 1. The war brought around the right for women to vote; conscription, compulsory rationing and also it changed many people's views about war. Joseph Murphy 10 M ...read more.