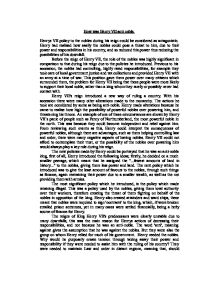 How was Henry VII anti noble.

How was Henry VII anti noble. Henrys VII policy to the nobles during his reign could be considered as antagonistic. Henry had realised how easily the nobles could pose a threat to him, due to their power and responsibilities in his country, and so reduced this power thus reducing the possibilities of his downfall. Before the reign of Henry VII, the role of the nobles was highly significant in comparison to that during his reign due to the policies he introduced. Previous to his accession, the nobles had controlling, highly rated responsibilities, for example they took care of local government justice and tax collections and provided Henry VII with an army at a time of war. This position gave them power over many citizens which surrounded them, the problem for Henry VII being that these people were more likely to support their local noble, rather than a king whom they rarely or possibly never had contact with. ...read more.

to the nobles, giving them less power and land. The next policy which he introduced was to give the least amount of favours to the nobles, through such things as finance, again restraining their power due to a smaller wealth, as well as the not providing them with armies. The most significant policy which he introduced, is the policy which made retaining illegal. This was a policy used by the nobles, giving them total authority over their workers, therefore creating the threat of them fighting on behalf of the nobles in opposition of the king. Henry also created attainders and ward ships, these meant that nobles were required to sign 'contracts' to the king, which, if were broken entailed prison sentences, yet in many cases were settled financially, being a hefty source of finance for Henry. The reigns of King Henry VII's predecessors were clearly unstable due to many downfalls, this was the main reason for Henrys actions of decreasing their responsibilities, and not because he was an anti-noble. ...read more.

Those whom Henry VII sacked from his council were unsuitable for their position, and in some ways incompetent. Henry VII decided to go for a mix of loyalty and experience, he appointed servants who had worked for Edward IV and who had legal qualifications. This policy was not technically anti-noble but it did have the result of keeping out most of the leading famillies simply because they were not qualified for jobs. Government under Henry VII then became better qualified and also because of its experience more effiecient. For Henry VII, the policies in which he introduced were clearly successful in securing his throne, as, although there were attempted usurptions, he remained in power until his death, unlike many before him, who were forced to abdicate due to actions taken by the nobility. Henry VII needed nobles to help him but with this advantage there are also letdowns and risks. With the power in which Henry VII had to give to nobles to let them help him meant he needed to make sure they were not abusing their powers. ...read more.