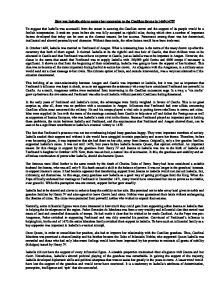 How was Isabella able to secure her succession to the Castilian throne in 1469-1479?

How was Isabella able to secure her succession to the Castilian throne in 1469-1479? To suggest that Isabella was successful from the outset in securing the Castilian crown and the support of its people would be a foolish interpretation. It took ten years before she was fully accepted as rightful ruler, during which time a number of important factors developed that today can be seen as the clearest reasons for her success. Paramount among these was her determined, intellectual and shrewd personality and character. Without these traits, the other factors would have been irrelevant. In October 1469, Isabella was married to Ferdinand of Aragon. What is interesting here is the terms of the treaty drawn up after the ceremony that both of them signed. It claimed Isabella to be the rightful and true heir of Castile, that their children were to be educated in Castile and that Ferdinand was to have no power in Castile, just as Isabella was to be impotent in Aragon. However, the clause in the terms that stated that Ferdinand was to supply Isabella with 100,000 gold florins and 4000 troops if necessary is significant. It shows us that from the beginning of their relationship, Isabella was going to have the support of her husband. This idea was to become all the more important during her bid to secure her crown. An allegiance with the Aragonese, in a military sense would send out a clear message to her rivals. The ultimate option of force, and outside intervention, was a very real alternative if the situation deteriorated. This building of an inter-relationship between Aragon and Castile was important to Isabella, but it was just as important that Ferdinand's influence was kept in check, so as to not aggravate the aristocracy who may have considered Ferdinand too powerful in Castile. As a result, Aragonese nobles were restrained from intervening in the Castilian succession saga. ...read more.

Isabella had neither the money nor support nor troops to seriously quell an invasion. This is why support from towns and cities was so important. The possibility of war links well with the general threat from Joanna who also claimed the Castilian throne. The start of 1475 saw a very real military danger - King Alfonso of Portugal threatening both to invade Castile and marry Joanna. France's Louis XI was also threatening action in Castile's northern provinces and this made the problem worse. It is here that the support she established from the grandees came to the fore, as she was able to borrow money from them. Her marriage to Ferdinand was also significant, as she was able to claim troops and raise some from her allegiance with grandees as well. Fortunately for Isabella, only one real battle took place - in Toro in March 1476. Portuguese forces would claim the outcome was uncertain, a stalemate. Isabella regarded it as a victory as it halted Alfonso's advance, forcing him to return to Portugal with Joanna. On his return to Lisbon, he was greeted with both good and bad news. The good news was that he had received Papal dispensation to marry Joanna but the bad news was that he learnt of an agreement between France and Castile that saw the French agree to halt their campaign, allowing Isabella's forces to concentrate totally on the Portuguese menace. 1478 was the principal year for Isabella. It was in 1478 that she really began to see the fruits of her labour, when her hard work began to pay off. A major reason for this was the birth of a son, providing security and, most importantly for many of Castile's citizens, the promise of a stable and peaceful succession when Isabella died. Alfonso attempted a second invasion during 1478, but the increased support from grandees and towns, mainly due to the birth of a son and an agreement with France, helped Isabella to emerge victorious. ...read more.

For the most part, the reasons are inter-linked, often arising as a direct result of previous clauses. The failure of the Portuguese invasion was important to Isabella, naturally so, but one can argue that without the influence of Ferdinand of Aragon, such a victory may not have occurred and, perhaps, the rivalry with Joanna may never have ended so well in Isabella's favour. Likewise, Isabella's formation of the Santa Hermandad would never have worked out if she didn't have the towns and cities on her side, and it can be argued that the towns and cities would never have acquiesced if there had been no backing from the Castilian grandees that Isabella so delicately and perfectly won the support of through the giving of privileges and offers of high powered positions. Amidst all this interrelation is the optimum reason for success as Castile was blessed with a monarch so dutiful, no trouble was spared in the bid to satisfy the people. So clever that those who fundamentally wanted not to support her found themselves giving in. So desperate for justice and peace that she would go to, literally, any lengths to establish her rule, to carry out her dream of a developed, economically, socially and politically sound Castile. Chroniclers of the time perhaps do the other contributions, like that of Ferdinand, little justice, spending much time also on devaluing most of the previous monarch's work. They may well be contributing to royalist propaganda but, ultimately, despite being appointed by the Queen to record her history in a favourable light, Isabella was a good Queen. While she alone did not secure her succession to the thrown, her positive and admirable attributes as a person and leader can be seen to be the best possible reason, above any others, for her accomplishment. "It was certainly a marvellous thing that what many men and great lords could not agree to effect in many years, one lone woman carried out in a little time." 'Decadas', Alonso de Palencia, 1485. ...read more.