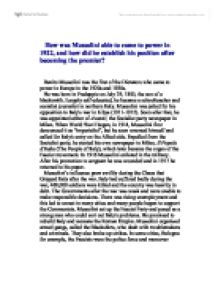 How was Mussolini able to come to power in 1922, and how did he establish his position after becoming the premier?

How was Mussolini able to come to power in 1922, and how did he establish his position after becoming the premier? Benito Mussolini was the first of the Dictators who came to power in Europe in the 1920s and 1930s. He was born in Predappio on July 29, 1883, the son of a blacksmith. Largely self-educated, he became a schoolteacher and socialist journalist in northern Italy. Mussolini was jailed for his opposition to Italy's war in Libya (1911-1912). Soon after that, he was appointed editor of Avanti!, the Socialist party newspaper in Milan. When World War I began, in 1914, Mussolini first denounced it as "imperialist", but he soon reversed himself and called for Italy's entry on the Allied side. ...read more.

He promised to rebuild Italy and recreate the Roman Empire. Mussolini organised armed gangs, called the Blackshirts, who dealt with troublemakers and criminals. They also broke up strikes. In some cities, Bologna for example, the Fascists were the police force and moreover Mussolini's newspaper, "Il Popolo d'Italia", spread his ideas. As unemployment grew and people became more desperate, they turned to Mussolini to solve Italy's problems. In March of 1919 Mussolini founded the Fasci di Combattimento (Combatent Group). The Fascist movement grew rapidly in the 1920's, spreading through the countryside where it's Black Shirt Militia won support of the landowners. To take advantage of the prevailing conditions in the country and the weakness of the Government, in October 1922 Mussolini threatened to march on Rome if he was not appointed Prime Minister. ...read more.

He tried to make Italy self-sufficient in food and to increase the Italian population. Mussolini began to build motorways to provide work for Italians during the Depression. He also built new public buildings and claimed that he "made the railways run on time. In 1929 Mussolini even managed to make an agreement with the Pope called the Lateran Treaties. This settled an argument between the Italian Government and the Pope that had been going on for nearly sixty years. He therefore established his position in the 1920's, because Italy appeared to be becoming more prosperous and more powerful and thus many Italians found work in the industries that Mussolini set up and Italy seemed to be recovering from the effects of the First World War, which made him very popular and this convinced many Italians that they should support Mussolini. By : Alexandre Rizvi ...read more.