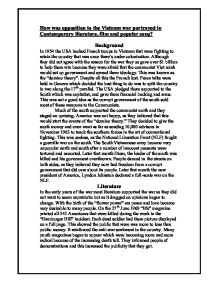 How was opposition to the Vietnam war portrayed in Contemporary literature, film and popular song?

How was opposition to the Vietnam war portrayed in Contemporary literature, film and popular song? Background In 1954 the USA backed French troops in Vietnam that were fighting to retain the country that was once there's under colonization. Although they did not agree with the reason for the war they us gave over $1 billion to help them win because they were afraid that the communist Viet minh would set up government and spread there ideology. This was known as the "domino theory". Despite all this the French lost. Peace talks were held in Geneva which decided the best thing to do was to split the country in two along the 17th parallel. The USA pledged there supported to the South which was capitalist, and gave them financial backing and arms. This was not a good idea as the corrupt government of the south sold most of these weapons to the Communists. Much of the south supported the communist north and they staged an uprising. America was not happy, as they believed that this would start the events of the "domino theory." They decided to give the south money and even went as far as sending 10,000 advisors in November 1963 to teach the southern forces in the art of conventional fighting. ...read more.

Others decided to completely drop out of society and live in communes were they grew there own food. As fighting intensified and casualties rose, anti-war feeling grew among the hippies and for the first time middle class Americans began to voice their unhappiness for the war. Popular Music Music was at the forefront of the protests movements across the world. In the United States singer-songwriters like Bob Dylan and Joan Baez wrote powerful anti-war songs. Dylan's blowing the wind combined the spiritual and political ideas of the peace movement and became an anthem for the anti-war protests against the USA's involvement in Vietnam. Music festivals like Woodstock in 1969 that features artists like Jimi Hendrix, The Who, Janis Joplin and Santana spread the message of protest, peace and love. Many artists felt that it was important to tell about the evils of war and its trials and tribulations. An example of one of these song is "Feel like I'm fixing to die" by Joe McDonald. It was written in 1968 at the time of the Tet offensive. It has a very sarcastic tone and is very pessimistic. It sums up the feeling of the soldiers that are going to die in a war that they do not understand. ...read more.

Probably the best movie about the Vietnam War was "Platoon" which was written by Oliver Stone who was a veteran. Because of the rawness and the portrayal of the American Soldiers no Hollywood Studio would agree to make it. It wasn't to the 1986 that it was made. It showed how many of the soldiers turned to drugs to help handle the effect the war had on them. It also painted a bad picture as to the leadership in the war with one scene in which a soldier kills his commanding officer. Media This was the first war every that viewers at home got full uncensored footage of the war straight into there homes. This showed how brutal and violent the war and built up more opposition. It showed the victims of American napalm attacks that went wrong and injured American soldiers. This made people believe that this was a savage, unjust war that they could not win. An example of this is the massacre of Mai Lai village that was considered friendly to American troops. They believed that they were Vietcong soldiers and killed everyone in the village. A film crew caught all of this on camera. When people say this at home they began to think what exactly were they trying to achieve. The reason there was so much resistance to the war was because most people did not understand what they were fighting for. ...read more.