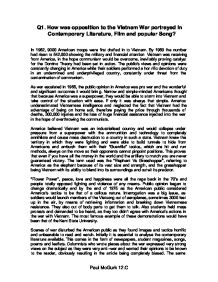 How was opposition to the Vietnam War portrayed in Contemporary Literature, Film and popular Song?

Q1. How was opposition to the Vietnam War portrayed in Contemporary Literature, Film and popular Song? In 1962, 9000 American troops were first drafted in to Vietnam. By 1969 the number had risen to 542,000 showing the military and financial attention Vietnam was receiving from America, in the hope communism would be overcome, inevitably proving catalyst for the Domino Theory had been set in action. The public's views and opinions were constantly changing in America while their soldiers performed a horrific devotion of duty in an undermined and underprivileged country, constantly under threat from the contamination of communism. As war escalated in 1965, the public opinion in America was pro war and the wonderful and significant outcomes it would bring. Narrow and simple-minded Americans thought that because America was a superpower, they would be able to storm into Vietnam and take control of the situation with ease. If only it was always that simple. America underestimated Vietnamese intelligence and neglected the fact that Vietnam had the advantage of being on home soil, therefore paying the price through thousands of deaths, 300,000 injuries and the loss of huge financial assistance injected into the war in the hope of overthrowing the communists. America believed Vietnam was an industrialised country and would collapse under pressure from a superpower with the ammunition and technology to completely annihilate and cause mass destruction to a country in such a state. Vietnam knew the territory in which they were fighting and were able to build tunnels to hide from Americans and ambush them with their "Guerrilla" tactics, which are hit and run methods, always on the move so their opponents cannot pinpoint positions. This proves that even if you have all the money in the world and the artillery to match you are never guaranteed victory. The term used was the "Elephant Vs Grasshopper", referring to America as the elephant because of its vast size and strength, and the grasshopper being Vietnam with its ability to blend into its surroundings and outwit its predator. ...read more.

Johnson also makes use of pointing out that it was not just American soldiers duty to protect the weak, but that every able American citizen should be a part of the countries efforts to restrain communism. In source B, we are provided with an insight into the views of war as it was seen as being acceptable due to the fact a party in honour for the soon to be departed soldiers in their quest to defend Vietnam. Also in the source we find out that "anti - war demonstrators" were vocal, but a minority. Although we heard a lot about demonstrations, it suggests that the people were mostly for war and only a few spoke out. Source B also states that an overwhelming majority of the people did not "draft-dodge", indicating that they wanted to fulfil their duty by honouring their country in war. Source B provides an account of volunteers boarding a bay for military induction, again showing the acceptance the soldiers portrayed through their willingness to attend and learn. Further in this source we read that the author experienced the scenes "a dozen or more times across the country", suggesting widespread support and acceptance of the war. We can gather that word of the events taking place in Vietnam were never broadcast or acknowledge in New York as they were never read in the New York Times. Source C does not necessarily show support for the war but supplies evidence that it was supported in vast quantities from the people fighting in the war. In 1969 over 540,000 soldiers had fought in the war for the Americans, this is a testimony that a vast amount of people supported the war if over 1/2 million people were prepared to fight. However, what the source fails to show is how many of the soldiers were forced to fight and were drafted involuntarily due to conscription. ...read more.

This showed tense times in American camps and enraged troops that they could not penetrate the Vietnamese resistance, so much so that they set about setting fire to villagers thatched huts. There is a slight contrast between sources J and I as in I, it is not representing every reporter, whereas in J it is not just any old news correspondent in any situation but that it was a news correspondent in the right place at the right time. Source J is from an American T.V news report. It dates back to 1968, post Tet Offensive, whenever America began to realise that they were not going to win the war. This source shows us that a soldiers work is never done as he is constantly reloading and empting his gun. It also shows the extreme pressure that soldiers are under and the strenuous conditions as it took them a whole week, non-stop, to force the Vietcong, a supposedly a weak and lacklustre army out of Saigon. Television also does a great job in portraying the seriousness of the situation if it takes 11,000 soldiers to force an untrained and spontaneous outfit out of Saigon. I feel that the media did a great deal in influencing American viewpoints towards the situation in Vietnam. Everybody started off very pro-war and backed the government's decisions 100%. Gradually opinion began to change as media began to portray war as a very inhumane act of violence on a defenceless country unable to stand up to the might of a world superpower, with never-ending military assistance and a well-drilled army. Suddenly everybody was pro-war as they became aware of situations in Vietnam of houses being bunt to a crisp and innocent women and children being savagely murdered by merciless soldiers capable of doing anything to protect its country's name. The American government along with the president lost all credibility and inevitably, the backing of the American people. Paul McGurk 12.C ...read more.