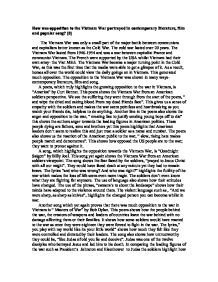 How was opposition to the Vietnam War portrayed in contemporary literature, film and popular song

How was opposition to the Vietnam War portrayed in contemporary literature, film and popular song? [8] The Vietnam War was only a small part of the major battle between communism and capitalism better known as the Cold War. The cold war lasted over 20 years. The Vietnam War lasted from 1946-1954 and was a war between capitalist France and communist Vietnam. The French were supported by the USA whilst Vietnam had their own army- the Viet Minh. The Vietnam War became a major turning point in the Cold War, as this was the first time that the media were able to get a glimpse of it. As a result, homes all over the world could view the daily goings on in Vietnam. This generated much opposition. The opposition to the Vietnam War was shown in many ways- contemporary literature, film and song. A poem, which truly highlights the growing opposition to the war in Vietnam, is "America" by Curt Bennet. This poem shows the Vietnam War from an American soldiers perspective. We see the suffering they went through from the start of the poem, " and wipe the dried and caking blood From my dead friends face". ...read more.

This poem shows how the people behind the war, the creators of weapons and leaders of countries leave the war behind with no damage affecting them or their families. It shows how some soldiers would have reacted to the war as once they were eighteen they were forced to fight in the war. The lyrics," you play with my world like its your little world" shows how much they felt like they were controlled and dictated by their leaders. The song also shows how untrustworthy they could be, "like Judas of old you lie and deceive". Judas was one of the twelve disciples who betrayed Jesus and led him to his death. In comparing the leading figures of the war such as President's Johnston and Eisenhower to Judas the soldiers highlight how they feel betrayed by them. The betrayal of these figures has led to many deaths. The song also shows how the Vietnam War affects every generation "you've thrown the worst fear that can ever be hurled, fear to children into the world". The song highlights arguably the worst outcome of the Vietnam War, a child's fear. Children should always feel safe but it is because of this war that doubt and fear has set in. ...read more.

"Platoon" was instrumental in portraying the realities through the camera eye of a director- a man who had experienced first hand the effects they had. This film is a prime example is showing "wars callous futility". The infamous "uncle Sam" poster was also doctored in order to show opposition to the war. Originally the poster was used to encourage young men to join the war by instilling a feeling of patriotism inside them. The slogan used was, " I want you" whilst showing uncle Sam pointing out of it. However the poster was greatly changed to show opposition to the Vietnam. The poster shows unlce sam reaching his hand out as if pleading for help. He is in a bad condition and appears to be wounded. He is evidently at the war. However the slogan used shows the anti Vietnam views, "I want out". It shows how the Vietnam War has broken this man down and he wants out of it. The war in Vietnam faced enormous opposition from all types of people from all walks of life. Some people chose to write a poem song or even a film to show their anger but many did not. The Vietnam War was portrayed as a pointless war resulting in a tragic loss of life. Many people today still suffer both the mental and physical scars, which Vietnam brought. ...read more.