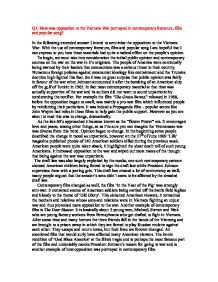 Q1. How was opposition to the Vietnam War portrayed in contemporary literature, film and popular song? In the following extended answer I intend to scrutinize the opposition to the Vietnam War. With the use of contemporary literature, film and popular song I am hopeful that I can express to you how these materials had quite a radical effect on the people's opinion. To begin, we must take into consideration the initial public opinion and contemporary sources on the war on the war in it's originate. The people of America were continually being warned by their leaders that communism was a serious threat to their country. Numerous foreign policies against communist ideology like containment and the Trumine doctrine high-lighted this fear. So it was no great surprise that public opinion was fairly in favour of the war when Johnson announced it after the bombing of an American ship off the gulf of Tonkin in 1965. In fact most contemporary material at that time was actually supportive of the war and its authors did not want to sound unpatriotic by condemning the conflict. For example the film "The Green Berets," released in 1968, before the opposition began to swell, was mainly a pro-war film which influenced people by reinforcing their patriotism. ...read more.

An emotional film that would surly have affected many American viewers. The ironic rendition of "God Bless America" at the film's tragic end is perhaps the most famous part of the film and undeniably mocks President Johnson's reason for going to war and is another example of how opposition was portrayed in contemporary film. The composition song was the earliest of contemporary sources to show opposition to war, this criticism mounted as time went on. It evidently opposed the war also, its lyrics grew more anti-war as the years drew on and more soldiers died. Their influence was also more widespread, songs could be broadcast on the radio so, unlike films, there was a larger audience. The songs too were influenced by the era of flower power and so they urged peace and harmony and of course preached of the evils of war. Country singer Joe Mc Donald sang "What are we fighting for? Don't ask me I don't give a damn, next stop is Vietnam..." a more popular artist Johnny Cash sang 'many a good man I saw fall' and 'I get a little tremolo when I talk' referring to the physiological impact it had on the soldiers and again influencing opposition to the war. Television was also an important avenue to portray opposition to the war. ...read more.

It was another two months before the American public learned about the massacre and trials. The photos of the war crime were too shocking for senior officials to stage an effective cover-up. One senator said, "There are so many kids just lying there; these pictures are authentic." The explosive news of the massacre fueled the outrage of the American peace movement, which demanded the withdrawal of American troops from Vietnam. It also led more potential draftees to file for objector status which meant that they didn't have to go to Vietnam. Those who had always argued against the war felt vindicated and those on the fringes of the movement became more vocal. As a cumulative effect of the literature, film and popular song portrayed from this time there was quite an obvious sway in public opinion. The media played an indispensable role in bringing about this change one source comically states "Overnight one TV correspondent with one cameraman could become as important as ten or twenty senators". This source obviously concurs with my belief that the media played a major role in portraying opposition through the use of contemporary literature, film and popular song in the Vietnam War. We also know that as a result of the publicity gained about the Vietnam War via these contemporary sources the anti-war movement grew. Subsequently, pressure from public opinion that had now changed to an anti-war stance caused the government to take action to end the war in Vietnam. ...read more.