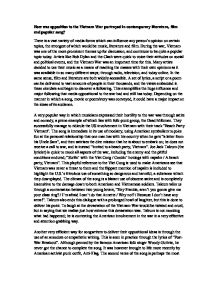 How was opposition to the Vietnam War portrayed in contemporary literature, film and popular song? There is a vast variety of media forms which can influence any person's opinion on certain topics, the strongest of which would be music, literature and film. During the war, Vietnam was one of the more prominent themes up for discussion, and continues to be quite a popular topic today. Artists like Bob Dylan and the Clash were quick to voice their attitudes on social and political events, and the Vietnam War was an important time for this. Many artists decided to use their music as a means of reaching the masses with their own opinions as it was available in so many different ways; through radio, television, and today online. In the same sense, film and literature are both widely accessible. A set of lyrics, a script or a poem can be delivered to vast amounts of people in their thousands, and the views embedded in these circulate and begin to discover a following. This exemplifies the huge influence and major following that media oppositional to the war had and still has today. Depending on the manner in which a song, movie or poem/story was conveyed, it could have a major impact on the ideas of its audience. A very popular way in which musicians expressed their hostility to the war was through satire and comedy, a prime example of which lies with folk-punk group, the Dead Milkmen. ...read more.

The final line of the second verse, 'It ain't Coca-Cola, it's rice,' brings to light the strong denial of the American people when it comes to the consequences of their actions. 'Coca-Cola' represents America as America can be easily associated with corporatocracy and 'Rice' represents the third world as rice is produced by lesser developed countries as a main crop and sold on to richer countries. This directly reflects the rape of third world countries by superior countries such as America through corporatocracy. This image allows for greater opposition because again, tyranny and terror is presented due to the war. The violence of the war is also presented through the line 'The Volatile Molotov says,' 'volatile' means hostile and destructive and 'Molotov (cocktail)' is type of bomb, in personifying this you see America as destructive. In the earlier stages of the war many productions came to be, channeling support and a general positive attitude towards the war however, in later years Hollywood began to adhere to the changing attitudes in regards to America's involvement and so many films proposing opposition began to surface. Probably one of the leading movies of the time was 'Apocalypse Now' (1979) which follows Captain Willard ho has been sent on a mission to Cambodia to assassinate a renegade Green Beret, General Kurtz. ...read more.

He makes use of massive wall displays (i.e. stencils) to reach his audience as his attention-grabbing approach is very difficult to disregard. The particular display I studied was called 'Vietnam/America' and featured Mickey Mouse and Ronald McDonald seemingly assisting a young Vietnamese girl. On closer inspection it is easy to realize the deeper meaning. Ronald McDonald and Mickey Mouse are both major American symbols representing corporatocracy. Banksy lines them beside Kim Phuc, a Vietnamese Napalm victim, in order to contrast the truth with America's 'truth'. Whilst Ronald McDonald and Mickey Mouse seem like innocent childhood characters they in fact represent manipulation and dishonest profiteering. Banksy uses them to sugar coat the actual situation - it would appear they are helping but they are doing nothing of the sort. Although friendly faces, both these characters are the fiends behind her pain. This is how America initially received support for the war - they used propaganda and the dream of a better society for Vietnam however, they corrupted the country with their mindless violence. Many different artists take different approaches to expressing their views, each of these are useful and effective to an audience. The use of these particular platforms allows the artists to get their messages to the masses therefore getting more and more people to understand and agree with their points of view. The artists I have studied have used a variety of techniques to showcase their opposition including satirizing the situation, creating sympathy, reversing propaganda and even sharing experiences. ?? ?? ?? ?? ...read more.