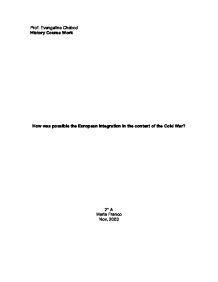 How was possible the European Integration in the context of the Cold War?

As a result " From Marshal Aid onwards, the Usa begun to see economic recovery of Germany and later its military contribution to Western Defence as vital to the European, and by extension, world balance."6 West Germany was going to be recovered and drawn into internationl politics by the Usa but this was not well seen by France, the French saw them selves as victims of German agression and their desire was a strong France and a weak and partioned Germany. With them, as well as with most other Europeans the idea of an Economically strong Germany aroused feelings of fear and even horror. Britain also opposed to West Germany recovey and they still had political and economic interests outside Europe. That is why they did not like the idea of integration between West European countries. Norway, Sweden and Denmark were very closed linked with Britain, it was unconceibable for them to have a different policy from Britain so they were against integration too. Finally there were some "local" factors that lead into European integration. ...read more.

But the internal conditions that lead into European Integration could not have been possible out of the context of the Cold War. Firstly there was a negative integrator that was the Soviet Union. This made Western European countries fought together towards their common enemy. They considered that being united communism was no longer a threat. During the Cold War, the Soviet threat provided cohesion for the Western alliance. This was important for creating an environment in which European states could find their common interest in collective actions such as the creation of the European Economic Community. Secondly there was a positive integrator which was the United States that also fought against the USSR and pusshed very strongly in favour of the integration. And finally in the context of the cold war, with most of Central and Eastern Europe behind the "iron courtain"(under the domminance of the Soviet Union), the European integration could begun between relatively small number of state-nations with comaparble economic level and with important older elements of common history. "In the middle of 1980�s the countries of Western Europe were more united than most people would have dreamed possible forty years later. ...read more.