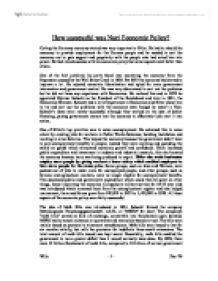 How successful was Nazi Economic Policy? Getting the Germany economy started was very important to Hitler. He had to rebuild the economy to provide employment for the German people and he needed to sort the economy out to gain support and popularity with the people who had voted him into power. He had mixed success with his economic policy but some aspects went better than others. One of the first problems his party faced was recovering the economy from the Depression caused by the Wall Street Crash in 1929. By 1933 the economy had started to improve a lot. He rejected economic liberalisation and opted for more government intervention and government control. He was very determined to sort out the problems but he did not have any experience with Economics. He realised this and in 1933 he appointed Hjalmar Schacht as the President of the Reichsbank and later in 1934, the Economics Minister. Schacht had a lot of experience in Economics and Hitler chose him to try and sort out the problems with the economy even though he wasn't a Nazi. ...read more.

The company's "mefo bills" served as bills of exchange, convertible into Reichsmark upon demand. MEFO had no actual existence or operations and was solely based on trust. The bills were mainly issued as payment to armament manufacturers. Mefo bills were issued to last for six months initially, but with the provision for indefinite three-month extensions. The total amount of mefo bills issued was kept secret. Essentially, mefo bills enabled the government to run a greater deficit than it would normally have done. By 1939, there were 12 billion Reichsmark of mefo bills, compared to 19 billion of normal government bonds. This strengthened the German economy by providing the government with various goods and services which it was then able to reinvest in the economy, fuelling its growth, and preparing it for Hitler's plans for war. Not only did the bills serve the above functions, they also concealed the military expenditure forbidden by the Treaty of Versailles. Germany had started to re arm slowly in 1933. ...read more.

The government regulated the imports and exports again so that only goods essential for rearmament were imported and everything else was sourced from inside Germany. The Plan aimed to increase agricultural output so there would be enough food for Germans in a war as they wouldn't be able to import food. Hitler cancelled all of the farmers' debts and gave them tax allowances and subsidies to produce more. Again this plan wasn't entirely successful and Germany was not fully self sufficient by 1939 except potato farming. The Economic Policy of the Nazi Party was always geared towards war. Schacht was able to improve the economy significantly; however, when he said things that Hitler didn't like, he was not listened to. This was a mistake by Hitler because G�ring was not good at economics and did not do a better job than Schacht and the economy was never successfully stabilised. However, Hitler's aim was never really to solve all Germany's economic problems, he wanted to get the country fit for war, so in that aspect he was mostly successful in achieving his aims. ?? ?? ?? ?? Wills - 1 - Dec '06 ...read more.