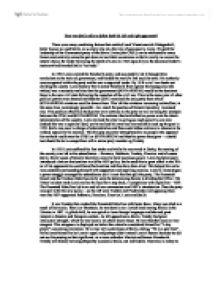 How was Stalin able to defeat both his left and right opponents?

How was Stalin able to defeat both his left and right opponents? There were many combining factors that enabled Josef Vissarionovich Dzhugashvili, better known as Josef Stalin, to so easily slip into the role of successor to Lenin. His path the leadership of the Communist party of the Soviet Union,(the CPSU) can be attributed to many factors and certainly cannot be put down to inevitable occurrence as Stalin was by no means the natural choice for leader following the death of Lenin in 1924 especially as the deceased leader's testament had branded Stalin "too rude." In 1903 Lenin created the Bolshevik party, and successfully led it through three revolutions to the helm of government, and headed the world's first socialist state. His authority was recognised within the party and he was a respected leader. By 1918 a civil war broke out dividing the county. Lenin foresaw that a united Bolshevik front against the bourgeoisie (the whites) was a necessity and also that the government (SOVNARKOM) would be the dominant force in the new civil state following the cessation of the civil war. Thus in the same year all other political parties were banned and thus the CSPU remained the only party from which SOVNARKOM ministers could be drawn from. ...read more.

Lenin in fact described him as "The most valuable member of the party" in his testament, although he stated his views contained too much enthusiasm for peasant profits and capitalism also. This was seen as un-Marxist, and he was forced to withdraw an article, which declared that the peasants should "Enrich yourselves". Bukharin had been very close friends with Stalin, and didn't expect him to reverse his support for N.E.P in 1928. Bukharin therefore, I believe, was an easier opponent for Stalin when he decided to introduce his Five Year Plan and Collectivisation of Agriculture in 1928-33, and Stalin's defeat of the right was made easier because of Bukharin's lack of power base within the party as Stalin, since being General Secretary, had created a firm one for himself. Bukharin was never the opponent the Trotsky was as he failed to come up with a successful plan to counter the arguments of super-industrialises. As a result he never really proved his abilities to his colleagues. Two politburo members who Stalin used as 'rightist allies' to block Trotsky were Kamenev and Zinoviev. They both initially supported N.E.P and attacked Trotsky's views. ...read more.

Stalin also held the power to the party and thus the right never were given a free hearing just as Stalin's enemies were not when he was party secretary. Trade Unions were the only hope of Stalin's oppositions yet Stalin still acted decisively against them. He sent the ruthless Politburo member Kaganovich, to undertake a purge against the suspect Trade Unionists. He also sent Molotov to carry out similar actions against the Moscow CPSU using loyal Party officials within its structure. As a result of this, by early 1929, Tomsky was no longer Trade Union Leader, Uglanov had been replaced in Moscow, Rykov had been superseded as premier by Molotov and Bukharin had been voted out as chairman of the Commintern and lost his place in the Politburo. They were in effect "dropping like flies" and Stalin wasn't having to work too hard for power. The gulf was never that wide between the left and right but Stalin exploited what little gap there was well. Overall I feel that none of Stalin's opposition from the left or the right had the confidence or the conviction to actually seriously challenge Stalin for the right to become Bolshevik leader, and as MaCauley states: "Stalin was greatly assisted by the inept tactics of his opponents." ...read more.