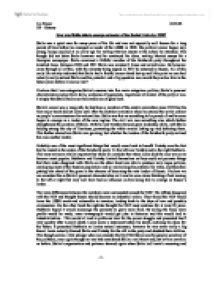 How was Stalin able to emerge as leader of the Soviet Union by 1929?

How was Stalin able to emerge as leader of the Soviet Union by 1929? Stalin was a quiet man for many years of his life and was not especially well known for a long period of time before he emerged as leader of the USSR in 1929. His political career began very young, being expelled at an early age for writing Marxist essays at the school he attended. This though did not deter Stalin however and he continued his ideas, writing Marxist essays for a Georgian newspaper. Stalin remained a faithful member of the Bolshevik party throughout the troubled times. Between 1902 and 1911 Stalin was arrested 5 times and exiled twice. He however came through all of this, with the amnesty being signed in 1917 he returned to Russia. All of this early life activity indicated that Stalin had a fruitful career ahead but up until this point no one had actually really noticed Stalin and his potential and a big question was would they notice him in the future years before it was too late? ...read more.

This may not seem vitally important but when we consider that when Lenin died the race was on to become most popular, Bukharin and Trotsky limited themselves as they could not promote things that their sides disagreed with. Stalin on the other hand was able to produce very vague policies, enveloping most of the Russian population and so maximising his potential for votes, and therefore putting him ahead of the game in the chances of becoming the new leader of Russia. I believe we can consider this as Stalin's personal characteristics as it was his own clever thinking of not leaning to the left or right that may well have had an influence on him being able to emerge as Russia's leader. The main differences between the members were surrounded around the NEP. The leftists disagreed with the NEP and thought Russia should become an industrial nation. They feared the NEP would leave the USSR weak and vulnerable to invasion, leading back to the days of war and possibly communism. ...read more.

Trotsky did later claim that Stalin had told him the wrong date for the funeral, so was this cunning on Stalin's part or neglect on Trotsky's. I believe that this is a strong show of politics, several tactical decisions trying to change the face of several politicians. The result of this set of events was to show Trotsky in a bad light and conveniently place Stalin in a good one but it has never been proven that Stalin planned this and so it has to be up to the individual to decide. I think that both parties played a very clever game throughout the leadership struggle and so find it hard to determine who may have been at fault. At this stage of the game it had become apparent that there were only two main contenders for the leadership battle: Lenin and Trotsky. Although Lenin, Kamenev and Zinoviev had formed a triumvirate against Trotsky it was obvious that only one out of the three would emerge to challenge Trotsky and that was Stalin. The two contenders wanted very different things out of leadership and there were several main leadership issues that were vital to their successes. Liz Power 22.10.03 DP - History - 1 - ...read more.