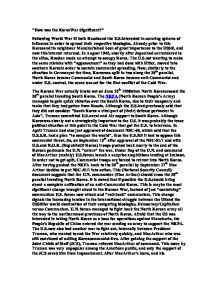 &quot;How was the Korean War Significant?&quot;

"How was the KoreaWar Significant?" Following World War II both Russiaand the U.S.interested in securing spheres of influence in order to spread their respective ideologies. Already prior to this Koreaand its neighbour Manchuriahad been of great importance to the USSR, and now this interest returned. In August 1945, shortly after Japanhad surrendered to the allies, Russian made an attempt to occupy Korea. The U.S.not wanting to make the same mistake with "appeasement" as they had done with Hitler, moved into southern Koreain order to contain communist spreading. Now, similarly to the situation in Germanyat the time, Koreawas split in two along the 38th parallel. North Korea became Communist and South Korea became anti-Communist and under U.S. control, the scene was set for the first conflict of the Cold War. The Korean War actually broke out on June 25th 1950when North Koreacrossed the 38th parallel invading South Korea. The NKPA (North Korean People's Army) managed to gain quick victories over the South Korea, due to their weaponry and tanks that they had gotten from Russia. ...read more.

U.N. forces managed to fight back the North Korean army all the way to the northernmost provinces of North Korea. Afraid that the US was interested in taking North Korea as a base for operations against Manchuria, the People's Republic of China entered the war sending an army to support the NKPA. The U.S.now also had another war to fight out, internally between President Truman, who wanted to end the War relatively quickly, and MacArthur who was still convinced of uniting Koreacommunist-free. After gaining the support of the Joint Chiefs of Staff (JCS), Truman relieved MacArthur of command. This move by Truman was very unpopular among the American public, and only the support of the JCS saved him from impeachment. After MacArthur's leave, and his replacement through Ridgway, U.S. forces focused on holding their ground just north of the 38th parallel. In July 1951 peace talks were beginning at Kaesongand then later moved to Panmunjom, yet did not bring any results, as both sides did not want to appear weak. ...read more.

The Korean War represented an important shift in U.S.Cold War policy; by 1950, a loss to communism anywhere was thought of as a loss everywhere, and must be engaged, due to the NSC-68 document. Finally, the Korean War demonstrated how difficult it would be to fight a limited war under "nuclear" conditions. Although the U.S.attempted to keep the war on a very small scale, it did get out of hand, involving China, at times seeming as if it might become a World War III. Looked at another light, though, the Korean War can be considered a success: although the war did at times get out of hand, the U.S. and the U.S.S.R. were able to avoid direct confrontation, especially since the U.S.S.R. fought mainly by supporting the N.K.P.A. Perhaps most importantly of all, though it was fought just five years after Hiroshimaand Nagasakiwere bombed, the Korean War was not an atomic war. Now in retrospect it can be said that the Korean War could have ended a lot worse, leaving not only Koreain ruin, nevertheless it ended with armistice, but the Cold War was not yet over. ...read more.