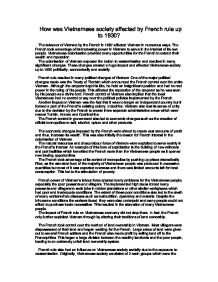 How was Vietnamese society affected by French rule up to 1930?

How was Vietnamese society affected by French rule up to 1930? The takeover of Vietnam by the French in 1887 affected Vietnam in numerous ways. The French took advantage of its increasing power in Vietnam to serve in the interest of its own people. Vietnamese colonisation provided many opportunities for the French to extend their wealth and reputation. The colonisation of Vietnam exposed the nation to westernisation and resulted in many significant changes. These changes created a huge impact and affected Vietnamese society up to 1930 politically, economically and socially. French rule resulted in many political changes of Vietnam. One of the major political changes made was the Treaty of Tientsin which announced the French control over the entire Vietnam. Although the emperor kept his title, he held an insignificant position and had no real power in the ruling of his people. This affected the reputation of the emperor as he was seen by his people as a divine lord. ...read more.

The French took advantage of its control of monopolies by pushing up prices dramatically. Rice, as the standard food of the majority of Vietnamese people was produced in excessive quantities but most of it was exported overseas and there was limited amounts left for local consumption. This led to the stimulation of poverty. French power of Vietnam's labour force created many problems for the Vietnamese people, especially the poor peasants and villagers. The implemented high taxes forced many peasants and villagers to seek jobs in rubber plantations or other similar workplaces which had poor and inadequate conditions. The extent of these poor conditions also led to the death of many workers from diseases such as malnutrition, dysentery and malaria. Despite the inhumane conditions the workers faced, they were also underpaid and many people could not afford to purchase basic necessities. This resulted in the starvation of many Vietnamese people. The impact of French rule on Vietnamese economy did not stop there. In fact, the French only further exploited Vietnam through by altering their traditions of land ownership. ...read more.

This involved a dramatic change in the writing system from the Chinese style of writing to a French-influenced style named "Quoc Ngu". This was very hard on the Vietnamese people because it was a new foreign language that was difficult for them to understand. Although they were expected to learn the new language, many students rejected it because of its difficulty and foreignness and by 1940, less than 20% of students remained at school. Vietnamese people were treated unequally, despite educational qualifications. An example of this is a French janitor receiving a higher pay than a Vietnamese professor with a PHD. The interests of the French most certainly took priority during the colonisation of Vietnam and placed a dramatic impact on Vietnamese society. Although the Vietnamese people did receive minor benefits of modern technology, the French were more concerned with the interests of their own people. The colonisation of Vietnam was used by the French to increase their own economy and placed a burden on many Vietnamese people. Their actions have resulted in a mostly negative impact on Vietnamese society up to 1930 through political, economic and social policies. By Kay Do ...read more.