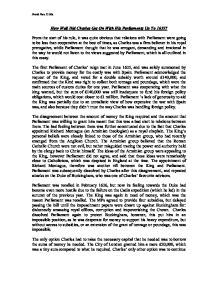 How Well Did Charles Get On With His Parliaments Up To 1629?

How Well Did Charles Get On With His Parliaments Up To 1629? From the start of his rule, it was quite obvious that relations with Parliament were going to be less than cooperative at the best of times, as Charles was a firm believer in his royal prerogative, while Parliament thought that he was arrogant, demanding and irrational in the way he would not listen to the views suggested by Parliament, which is all outlined in this essay. The first Parliament of Charles' reign met in June 1625, and was solely summoned by Charles to provide money for the costly was with Spain. Parliament acknowledged the request of the King, and voted for a double subsidy worth around �140,000, and confirmed that the Kind was right to collect both tonnage and poundage, which were the main sources of custom duties for one year. Parliament was cooperating with what the king wanted, but the sum of �140,000 was still inadequate to fund his foreign policy obligations, which would cost closer to �1 million. Parliament 's lack of generosity to aid the King was partially due to an unrealistic view of how expensive the war with Spain was, and also because they didn't trust the way Charles was handling foreign policy. The disagreement between the amount of money the King required and the amount that Parliament was willing to grant him meant that this was a bad start to relations between them. ...read more.

Many MPs from the recently dissolved Parliament refused to accept the legality of the collection of these duties, as they were arranged without Parliamentary consent. The forced loan by the King created uproar throughout the nation, which culminated in the 'Five Knights Case' in which five men refused to give the King the money he required, and challenged the King's right to imprison them. These men were eventually imprisoned by judges who were upholding the King's royal prerogative. Even though Parliament wasn't in session, the extra-parliamentary collection of duties from the nation caused further friction between the Crown and Parliament, whose relationship seemed to be rapidly diverging from being compliant with one another. The relationship between Charles and Parliament up to now had been very rocky, partially due to the fact the Parliament was a little na�ve about just how expensive the war with Spain would be, and was unwilling to grant the King money, as they didn't support his choice of advisors (especially Buckingham), or his foreign policy with other European countries. Buckingham's exploits may have been the match that ignited the tension between Charles and Parliament, as he had made several blunders on his various trips to the continent including his negotiation of a marriage between Henrietta Maria (the sister of the French King), promising her that she could carry on practicing Catholicism. ...read more.

Parliament's trust in the King declined, and their period of cooperation began to rapidly crumble. In Court, strenuous attacks were made of Arminianism and the collection of taxation, which the King solved by dissolving Parliament for a third time. The Lords complied with their dissolvement, but the Commons were not as compliant. Two MPs (Holles and Valentine0 along with Sir John Eliot were tried and imprisoned after attacking both Arminianism and extra-parliamentary taxation. As a result, Charles dispensed with Parliament's services for the near future. He thought that the problems he had encountered with Parliament were due to a small group of troublemakers who had corrupted their fellow MPs to their viewpoint. In conclusion I can say that Charles' relations with his Parliaments up to 1629 were very uncooperative, as it was dissolved thrice for many reasons, but twice in order to protect his favourite, the Duke of Buckingham. Parliament disliked Buckingham, and the King's appointment of Richard Montague as royal chaplain, and his Arminian views, while Charles disliked the way Parliament openly attacked both his Arminian views and Buckingham. The one period of cooperation between the two sides was the 'Petition of Rights' in which the King assented Parliament's requests and Parliament granted the King five subsidies, however that period of cooperation was short lasted and eventually ended with Parliament being dissolved. Generally the King's relations with Parliament until 1629 were uncooperative, and sometimes a little vicious in the way each would attack the others viewpoints, and question one another's rights. Pratik Vats 12 N/A ...read more.