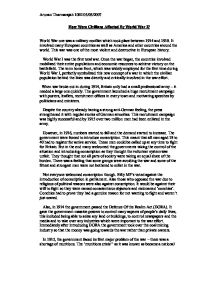 How Were Civilians Affected By World War I?

How Were Civilians Affected By World War I? World War one was a military conflict which took place between 1914 and 1918. It involved many European countries as well as America and other countries around the world. This war was one of the most violent and destructive in European history. World War I was the first total war. Once the war began, the countries involved mobilized their entire populations and economic resources to achieve victory on the battlefield. The term home front, which was widely employed for the first time during World War I, perfectly symbolized this new concept of a war in which the civilian population behind the lines was directly and critically involved in the war effort. When war broke out in during 1914, Britain only had a small professional army - it needed a large one quickly. The government launched a huge recruitment campaign with posters, leaflets, recruitment offices in every town and motivating speeches by politicians and ministers. ...read more.

Immediately after introducing DORA the government took over the coal mining industry so that the money was going towards the war rather than private owners. In 1915, the government faced its first major problem of the war - there was a shortage of munitions. The 'munitions crisis'' as it was known as became a national scandal exposed by the Daily Mail. Due to this crisis a coalition government was formed to work together to support the war effort. This coalition included MP's from different parties. Under DORA, the government introduced a number of measures to 'deliver the goods'. One of the first problems the government faced was the shortage of skilled workers in key industries. Lloyd George tried to force skilled workers to stay where they were needed instead of working where they could get the best pay. Another key element of Lloyd George's programme was to introduce women into the workforce. Despite the disagreement of trade unions Lloyd George and the government went ahead with this. ...read more.

The government also controlled the newspapers to make sure that 'all news was good news'. From the start of the war, all bad news was strictly controlled. When the battleship HMS Audacious was sunk in 1914, it was simply not reported. It was not until 1916 that the government allowed approved journalists to go to the front to report on the war. These reports focused only on good news. The government also censored letters from soldiers at the front. The soldiers sometimes chose to censor themselves as they did not want to report bad news back to their families and cause worry. Children were also aimed at by the government. Toys, games, comics and books were all aimed at making children support the war effort. These books and magazines sold well since many of them continued to sell after the war in the 1920's and 1930's. The end of the war in November 1918 came as a relief with a sense of triumph. People were all too aware by then of the human and financial cost of the war in Britain and in other countries, and were desperate to rebuild their lives. Arunan Tharmarajah 10HI 05/05/2007 ...read more.