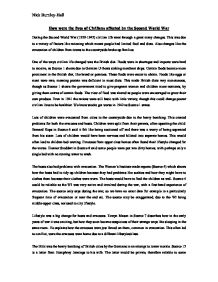 How were the lives of Civilians affected by the Second World War During the Second World War (1939-1945) civilian life went through a great many changes. This was due to a variety of factors like rationing which meant people had limited food and diets. Also changes like the evacuation of children from towns to the countryside broke up families. One of the ways civilian life changed was the British diet. Foods were in shortages and imports were hard to receive, as Source 1 shows due to German U-Boats sinking merchant ships. Certain foods became more prominent in the British diet, like bread or potatoes. These foods were easier to obtain. Foods like eggs or meat were rare, meaning protein was deficient in most diets. This made British diets very monotonous, though as Source 1 shows the government tried to give pregnant women and children more nutrients, by giving them extras of certain foods. The view of food was altered as people were encouraged to grow their own produce. Even in 1941 the rations were still basic with little variety, though this could change poorer civilian lives to be healthier. We know stocks got worse in 1942 as Source 1 states. Lots of children were evacuated from cities to the countryside due to the heavy bombing. ...read more.

Instead it focuses more on the efforts of volunteers. However a USA clip called Why We Fight made in 1943 showed a different side to the Coventry raid. With dramatic music it shows explosion and destruction. Then switching to sad music it shows the grief of families at funerals. A German Newsreel on the Coventry raid in 1940 makes a point of bombing Britain, showing the cities, explosions and fires. All you can hear is the bombing going on. Neighbours Under Fire made in 1940, by the British for the USA aggress with the point that people were now homeless due to the wreckages. However it also shows volunteers helping and still gives the view of high morale. The British Newsreel has real footage. The raid was in 1940, so they've had time to research and gather clips. However it is unreliable due to it focusing on only the good points, censoring wreckage and using propaganda to keep morale up. Why We Fight is giving researched reasons to highlight why USA is fighting in the war. Also the fact it is real footage of British civilians makes it more reliable. It is not as reliable as the USA is using the clip to rally support/justify the war. This could lead to exaggeration on grief to motivate people to join the war, support it or do their bit to help. ...read more.

The date also means that the source is not a first-hand experience and is based on other sources. Every civilian experienced change in their daily routines in a variety of ways. From the early years of World War II rationing was introduced due to food shortages. This meant the British diet changed, were some people got more to eat and some were now missing essential nutrients. Evacuation was often unnerving being away from home. It could often mean better lifestyle for poorer evacuees, but some were put in poorer households. The hosts had to put up with another person, very much forced on them, but some found it great company. Evacuation was a precaution due to the Blitz. The rural areas were sometimes still targeted, but cities were harder hit. Civilians might have to adapt to living in a shelter or having no heating or water. The men were conscripted into war, an exciting yet scary experience, being broken away from family with the reality of death. This meant change for women, taking on the roles on handling machinery or driving trucks. The men who stayed behind often volunteered to join the Home Guard or to help with air-raid services. The changes were necessary, as precautions to sustain the country and keep its public safe. In some cases it was a bitter and harsh change; in others it gave them a positive change. ?? ?? ?? ?? Nick Burnley-Hall ...read more.