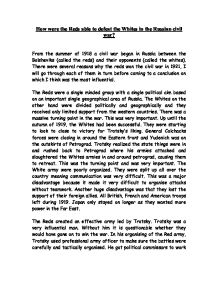 How were the Reds able to defeat the Whites in the Russian civil war? From the summer of 1918 a civil war began in Russia between the Bolsheviks (called the reds) and their opponents (called the whites). There were several reasons why the reds won the civil war in 1921, I will go through each of them in turn before coming to a conclusion on which I think was the most influential. The Reds were a single minded group with a single political aim based on an important single geographical area of Russia. The Whites on the other hand were divided politically and geographically and they received only limited support from the western countries. There was a massive turning point in the war. This was very important. Up until the autumn of 1919, the Whites had been successful. They were starting to look to close to victory for Trotsky's liking. ...read more.

In his organising of the Red army, Trotsky used professional army officer to make sure the battles were carefully and tactically organised. He got political commissars to work with the officers. This was not their only job however, if the officers were not loyal the Commissars were too execute them. Sometimes they used their families as hostages. Another factor that helped the Red Army was that Trotsky made sure they were very well fed. He made it compulsory for men to join the Red Army and brought back the death penalty. His ruthlessness was notorious and the means in my opinion did not justify the ends but there is no question that he built the red army to be a great fighting force. The Reds used terror as a deliberate tactic to weaken opposition to their rule. The Bolsheviks showed their true colours here. ...read more.

Once again this helped the Red army but for everyone else it was tragic. The Reds made great use of women to help in their war effort. Bolshevik women were one of the reasons why the Bolsheviks won. They were not only used as spies, to dig trenches and fortifications, and helped with propaganda, but they fought and died on the front lines. Konkordia Samoilovna, Alexandra Kollantai and Larrisa Reisner were all famous women who helped the blosheviks to victory. All of the above reason contributed to help the Bolsheviks succeed against the whites. Of the five reasons why the Reds won the civil war I believe that the most important reason was the way that Trotsky created an effective and ruthless army. I believe this because without the successful army they would never have had a chance. The whites would have succeeded in the autumn of 1919 and on many other occasions. The strength of the army led them to victory along with the other reasons but the army was the decisive factor. ...read more.