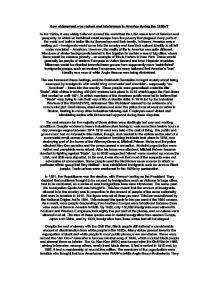 How widespread was racism and intolerance in America during the 1920s?

How widespread was racism and intolerance in America during the 1920s? In the 1920s, it was widely believed around the world that the USA was a land of freedom and prosperity, in which an individual could escape from the poverty that plagued many parts of the world and build a better life for themselves and their family. In theory, America was a melting pot - immigrants would come into the country and lose their cultural identity to all fall under one label - American. However, the reality of life in America was quite different. Members of similar backgrounds tended to live together in certain areas of big cities, where there would be extreme poverty - an example of this is Harlem in New York. These would generally be people of eastern European or Asian descent and from Hispanic countries. Bitterness would be directed towards these groups from supposedly more "established" immigrants groups, such as western Europeans, as many believed that America's "true" identity as a race of white Anglo-Saxons was being diminished. The war increased these feelings, and the Bolshevik Revolution brought anxiety about being swamped by immigrants who would bring communist and anarchist - supposedly "un-American" - ideas into the country. These people were generalised under the title "Reds".3600 strikes involving 400,000 workers took place in 1919 which began the Red Scare that carried on until 1921, in which members of the American public were led to believe that "Reds" were trying to ruin their way of life. ...read more.

The Ku Klux Klan (KKK) was formed after the Civil War in 1864, aiming to terrorise, among others, newly freed black slaves. It had a revival in 1915 and, by 1925, it had a membership of around five million. The members of the organization were fanatics who thought that true Americans were WASPs (white Anglo-Saxon Protestants. They were anti-communist, anti-negro, anti-Catholic, anti-Jew and against all foreigners, and believed they were protecting basic American values. In the South, it was specifically black people who were terrorised. The Klan had some powerful political members in the South, such as the Governor of Texas and a senator from Alabama. After 1925, Klan membership began to decline, particularly because of the abuse of power by some leaders. In Indiana, the 'Grand Dragon', D.C Stephenson, was accused of raping and mutilating his female assistant, Madge Oberholzer, who later took and overdose and gave her evidence against Stephenson in a statement from her deathbed. He was sentenced to life imprisonment. As black people continually suffered intolerance and extreme poverty in the Southern states, many began to move further North in hope of a better life - the black population in New York doubled from 150,000 to 300,000 up until the end of the 1920s. Life in the cities, though, was still difficult. ...read more.

To challenge the anti-evolution law in Tennessee, a science teacher named John Scopes answered an advertisement from the American Civil Liberties Union, who wanted the public to know it's views on the law and to champion the freedom of speech. Scopes agreed to be tried for teaching the evolution theory in his classroom. The trial took place in July 1925 to a packed courtroom, and was broadcast over the radio. He was defended by the famous criminal lawyer, Clarence Darrow, and the prosecution was headed by fundamentalist, William Jennings Bryan. Scopes was found guilty of breaking the law and fined $100, but the focused on presenting the argument for the theory of evolutions and was regarded as a victory for the modernists and a blow to the fundamentalists. Darrow succeeded in undermining the beliefs of this group by asking questions such as "Did Eve really come from Adam's rib?" to which Bryan replied "Yes". In conclusion, we can say that there was a serious degree of racism and intolerance in America, but it would be unfair and inaccurate to say that all American were racist. Such major periods as the Black Renaissance and events like the Monkey Trial mean that the 1920s can be viewed as a turning point in American history and in the public's attitudes to ethnic people in America ...read more.