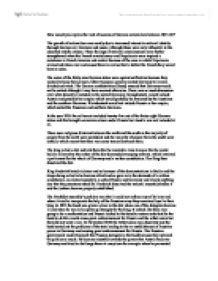 How would you explain the lack of success of German nationalism between 1815-60?

How would you explain the lack of success of German nationalism between 1815-60? The growth of nationalism was mostly due to increased interest in national identity through German art, literature and music, although these were only influential to the educated middle classes. These feelings of national consciousness were further strengthened when the French revolutionary and Napoleonic wars inspired a resistance to French invasion and control because of the ease in which Napoleons armies had taken over and caused them to realise that to defeat the French they would have to unite. The rulers of the thirty-nine German states were against unification because they wanted to keep their powers. Other European powers wanted Germany to remain divided and weak. ...read more.

The king called a diet and told them that he wanted to raise taxes so that he could build a railway but the ember of the diet demanded sweeping reforms, which involved a parliament for the whole of Germany and a written constitution. The King then dissolved the diet. King Frederick hated violence and so because of the demonstrations in Berlin and the troops being called in he became afraid and so gave in to the demands of a written constitution, an elected assembly, a united Prussia and Germany and almost anything else that the protestors asked for. Frederick dissolved the national assembly before it and the Junkers became properly established. ...read more.

The Prussian government made Bismarck the Prussian delegate to the bund because they admired his politics so much. He became resentful towards the power that Austria had over Germany and tried to challenge them at every turn for example when he prevented Austria from becoming involved in the conflict in southeast Europe. Bismarck was sent to St Petersburg in 1859 as Prussian ambassador because the king and the Prussians were not happy with his proposal to attack Austria. The nationalist movement was not at all a great success for many reasons such as the fact that there was a lot of opposition and there was great difficulty in deciding what should be included in the united Germany. The power that Austria had over Germany was also a great hold back as was the fact that King Frederick dissolved the National assembly before they had been given a chance. ...read more.