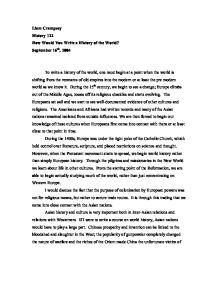 How Would You Write a History of the World?

Liam Crampsey History 122 How Would You Write a History of the World? September 16th, 2004 To write a history of the world, one must begin at a point when the world is shifting from the remnants of old empires into the modern or at least the pre modern world as we know it. During the 15th century, we begin to see a change; Europe climbs out of the Middle Ages, tosses off its religious shackles and starts evolving. The Europeans set sail and we start to see well-documented evidence of other cultures and religions. The Americans and Africans had written records and many of the Asian nations remained isolated from outside influences. We are then forced to begin our knowledge of these cultures when Europeans first come into contact with them or at least close to that point in time. During the 1400s, Europe was under the tight yoke of the Catholic Church, which held control over literature, scripture, and placed restrictions on science and thought. ...read more.

I would have to include a section of Japanese history during the Sengoku Jidai, a period of Japanese history that set them on a powerful path. I would concentrate on the politics and wars of Oda Nobunaga, Toyotomi Hideyoshi and finally unification under Tokugawa Ieyasu. The unification of Japan and resistance to 'gaijins' allowed them to be a power in Southeast Asia and also their militaristic attitude to the rest of Asia would eventually be a cause of World War II. As Japan became unified, I would bring the centre of study back to Europe to focus on the absolutist monarchs. It would be important to show the result of the monarchs exploitation of the masses, specifically Louis XVI and Charles I. Drastic changes are forced upon not only England and France, but surrounding countries. Scotland, for example was greatly affected when the English deposed the Stuart kings. The Jacobites began two rebellions in 1715 and 1745, which ultimately failed and with them, the last of Scottish resistance and the creation peaceful Britain. ...read more.

I would delve into his policies, the support of the German people and the lack of resistance by other European nations. Continuing with Hitler's ascension, I would highlight the opening stages of World War II ie: Blitzkrieg, Manchuria and the Invasion of France. From there, I would try and concentrate on the more forgotten theatres of war such as the Italian, North African and Russian. I would conclude World War II with an in depth study of the Holocaust, from the effects on the common person to the Nuremberg trials. After World War II, I would conclude my year, partly because it's long enough to fill any remaining gaps, and partly because the events of the Cold War are too plentiful to squeeze in. The Cold War alone could easily fill a year's classes, so cramming it in with the last 600 years of human history would be unfitting. Unfortunately, I find that I take a much more Eurocentric study of history, simply because of my lack of knowledge of Eastern history and the sheer amount of events occurring in Europe. ...read more.