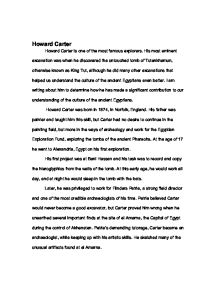 Howard Carter Howard Carter is one of the most famous explorers. His most eminent excavation was when he discovered the untouched tomb of Tutenkhamun, otherwise known as King Tut, although he did many other excavations that helped us understand the culture of the ancient Egyptians even better. I am writing about him to determine how he has made a significant contribution to our understanding of the culture of the ancient Egyptians. Howard Carter was born in 1874, in Norfolk, England. His father was painter and taught him this skill, but Carter had no desire to continue in the painting field, but more in the ways of archeology and work for the Egyptian Exploration Fund, exploring the tombs of the ancient Pharaohs. At the age of 17 he went to Alexandria, Egypt on his first exploration. His first project was at Bani Hassan and his task was to record and copy the hieroglyphics from the walls of the tomb. At this early age, he would work all day, and at night he would sleep in the tomb with the bats. ...read more.

Carter's employment at the Egyptian Antiquities Service had ended in an unfortunate incident between the Egyptian site guards and a number of drunken French tourists. When the tourists became violently abusive to the guards, Carter allowed the guards to defend themselves. The French tourists, enraged, went through some high officials including the Egyptian Consul General Lord Cromer and called for Carter to make a formal apology. Carter refused, standing by his belief that he made the right decision. The incident set Carter back a few paces and caused him to be posted to the Nile Delta town of Tanta, a place with very little archaeological involvement. This forced Carter to resign from the Antiquities Service in 1905. Howard Carter sustained a hard existence after resigning from the Antiquities Service. He had to make a living by working as a commercial watercolorist or sometimes a guide for tourists. This lifestyle continued until around 1908 when Gaston Maspero introduced Carter to the Fifth Lord Carnarvon. ...read more.

At about 4 P.M. that day, Carter broke through the second plaster block and made one of the discoveries of the century, the tomb of King Tutankhamun. The tomb's artifacts took quite a while, a decade, to catalogue. During this time, Lord Carvarvon died of pneumonia. After the media got wind of the treasures of King Tutankhamun and the death of Lord Carnarvon, the hype about a mummy's curse set the media on fire. Finally, the artifacts were sent to the Egyptian Museum in Cairo and the corpse of the young king was studied and laid back to rest. This was his last excavation, and he then took up the hobby of collecting Egyptian artifacts. He returned to England and in 1939, at the age of 65, Howard Carter died. Howard Carter contributed to everyone's understanding of ancient Egyptian culture by discovering many artifacts and scriptures on walls, and he uncovered a tomb that was untouched by tomb robbers, while these people invaded almost all other tombs. Just about everything was taken so this was the first time we could actually see a whole picture of what the Egyptian tomb was and its significance. ...read more.