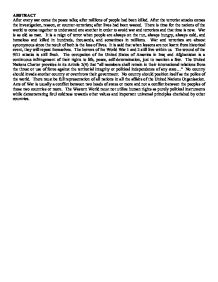 ABSTRACT After every war come the peace talks; after millions of people had been killed. After the terrorist attacks comes the investigation, reason, or counter-terrorism; after lives had been wasted. There is time for the nations of the world to come together to understand one another in order to avoid war and terrorism and that time is now. War is as old as man. It is a reign of terror when people are always on the run, always hungry, always cold, and homeless and killed in hundreds, thousands, and sometimes in millions. War and terrorism are almost synonymous since the result of both is the loss of lives. It is said that when lessons are not learnt from historical event, they will repeat themselves. The horrors of the World War 1 and 2 still live within us. The wound of the 9/11 attacks is still fresh. The occupation of the United States of America in Iraq and Afghanistan is a continuous infringement of their rights to life, peace, self-determination, just to mention a few. The United Nations Charter provides in its Article 2(4) that "all members shall retrain in their international relations from the threat or use of force against the territorial integrity or political independence of any state..." ...read more.

Terrorism goes beyond this; a government could carry out acts of terrorism on its citizens. Again, the Shorter Oxford English Dictionary defines terrorism as "Government by intimidation; the system of the Terror." War and Terrorism are the same since the death of innocent people (i.e. the citizenry) is the aftermath of either of them. War and terrorism cannot be eradicated but it can however be reduced with the full recognition and enforcement of the following human rights. The right to self determination, the right to peace, the right to life, the right to freedom of thought, cognizance and religion, the right to privacy, the right to information and education, the right to movement, the right to freedom against discrimination based an colour, race, sex, or religion or language, political or other opinion, the right to expression and the right to an economic or political ideology. As earlier stated, it is difficult to say which right is the most important because of the unique circumstance that might be surrounding the violation of such a right. The rights highlighted above will be explained briefly but not in accordance with any particular sequence or importance; 1. ...read more.

The most recent is the ban of Muslim headscarf by the French Parliament and government. Such infringement sometimes leads to violence or even acts of terrorism. 7. The Right to education: Education can be formal or informal. Education is very important and governments of different nations should make educational facilities and institutions accessible to the citizen and aliens alike 8. Right to information: The right to information too is very fundamental. The citizens of a country should have access to the affairs of its country and what goes on in its public service. For example, Americans have a right to know about the investigation carried out by its government over the 9/11 terrorist attacks. 9. The right to expression: Freedom of speech and expression could have negative or positive results whether upheld or violated but of importance is its credibility and authenticity. The freedom of speech and expression should be given to everybody without discrimination of any form. 10. The right to freedom of movement: Freedom of movement especially in respect to immigrants is usually subjected to municipal laws. However, the right to emigrate should not be curtailed by municipal laws. Kifayah Motilewa AbdulQuadri P. O. Box 3927, Sapon, Abeokuta, Nigeria. Home Phone: 234 - 39 - 240118 234 - 80 - 42140709 E-mail: keefayahq@yahoo.com ...read more.