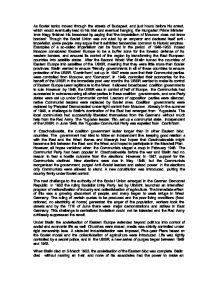 As Soviet tanks moved through the streets of Budapest, and just hours before his arrest, which would eventually lead to his trial and eventual hanging, the Hungarian Prime Minister Imre Nagy finished his broadcast by saying that 'the imperialism of Moscow does not know borders'. Though the Soviet Union was not ruled by an emperor and declared itself anti-imperialist, some people may argue that it exhibited tendencies common to historic empires. Examples of a so-called imperialism can be found in the period of 1948-1953. Indeed Moscow considered Eastern Europe to be a buffer zone for the forward defense of its western borders, and ensured its control of the region by transforming the East European countries into satellite states. After the Second World War Stalin turned the countries of Eastern Europe into satellites of the USSR, meaning that they were little more than Soviet provinces. Stalin wanted to ensure 'friendly governments in all of these countries to ensure protection of the USSR. 'Cominform', set up in 1947 made sure that their Communist parties were controlled from Moscow, and 'Comecon', in 1949, controlled their economies for the benefit of the USSR.In the immediate post-war months the USSR wanted to make its control of Eastern Europe seem legitimate to the West. ...read more.

The ruling of certain quotas to be produced and the poor living conditions (food rationed, no electricity at home) generated the anger of the population, workers took the streets and by the 17th of June there were major demonstrations and strikes in East Germany. This challenge to centralized Socialism could not be tolerated and the Red Army ruthlessly suppressed the revolt. Under Stalin the sovietisation of Eastern Europe extended beyond politics into control of social and economic life as well. Churches were closed, media was strictly controlled under rigid censorship laws. A state-led industrialization was imposed, Five-year Plans based on the Soviet model and the collectivisation of agriculture were introduced. Life was tightly controlled by a secret police, and in the USSR, a new series of purges began between 1949 and 1953. When Stalin died on 5 March 1953, the sovietisation of the Eastern bloc was complete. Stalin died without naming an heir, and none of his associates had the power to make an immediate claim to supreme leadership. At first the deceased dictator's colleagues tried to rule jointly, with Malenkov holding the top position of prime minister. After a poor showing by light industry and agriculture, Malenkov resigned as prime minister in February 1955. ...read more.

Alarmed by this, Khrushchev decided to send the Red Army to deal with the revolt. On 4 November the invasion began and thousands of Soviet tanks rolled into Hungary; the uprising was crushed. In January 1957, representatives of the Soviet Union, Bulgaria, Hungary and Romania met in Budapest to review internal developments in Hungary since the establishment of the Sovietimposed government. The communiqu� justifies the Russian intervention in Hungary. The communiqu� mentions 'the great banner of Marxism-Leninism'. However, Lenin wanted 'complete equality of rights for all nations' and 'the right of nations to self-determination' while in Das Kapital Marx says 'How disastrous it is for a nation when it has subjugated another nation'. However, the Soviets were not willing to allow any changes in their satellite states and would crush any threat to their control. In conclusion, I believe that Imre Nagy's assertion, 'the imperialism of Moscow does not know borders', is perfectly legitimate. The original authors of communism publicly opposed imperialism but the Soviet Union certainly practiced it. The Soviet doctrine was to spread Marxism-Leninism, however this task didn't imply the creation of a sphere of influence, as Stalin did and which was later re-enforced by Khrushchev. Imperialism means expansionist desires, where the target country becomes a possession of the Empire, and it's what happened with the Soviet attempt to control Czechoslovakia, Hungary, Poland, Bulgaria and Romania. ...read more.