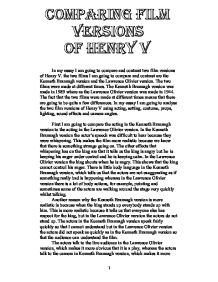 I am going to compare and contrast two film versions of Henry V.

Props are important because thy can distinguish one character form another. The Lawrence Olivier version has a prop to tell us who is the king. The prop is a crown. The Kenneth Brannagh version has a table and chairs, so that everyone can sit down. The Lawrence Olivier version doesn't have any tables and chairs, because it would be hard to carry on and off the stage or maybe it is because they would not have been able to fit a table on the stage. In a play lighting can decide what a person's character is like. In the Kenneth Brannagh version at the beginning when the archbishop of Canterbury and the bishop of Ely are talking there is a dark and gloomy background with candles to convey suspicion when they talk secretively. The gloomy lights also make them look sly. Another effect they use with lighting is to show half of both of their faces. This suggests to us that they are two faced. This also tells us that they are showing us their bad side. When the king enters there is a blinding light in the background and a shadow is not allowing us to see him. ...read more.