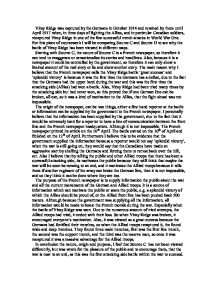 I will be comparing Source C and Source D to see why the battle of Vimy Ridge has been viewed in different ways.

Vimy Ridge was captured by the Germans in October 1914 and retained by them until April 1917 when, in three days of fighting the Allies, and in particular Canadian soldiers, recaptured Vimy Ridge in one of the few successful trench attacks in World War One. For this piece of coursework I will be comparing Source C and Source D to see why the battle of Vimy Ridge has been viewed in different ways. Starting with Source C, the nature of Source C is a French newspaper, so therefore it can tend to exaggerate or sensationalise its stories and headlines. Also, because it is a newspaper it could be controlled by the government, so therefore it can only show a limited amount of the real story or lie and show another story. The main reason why I believe that the French newspaper calls the Vimy Ridge battle 'great success' and 'splendid victory' is because it was the first time the Germans has a defeat, due to the fact that the Germans had the upper hand during the war and this was the first time the attacking side (Allies) had won a battle. Also, Vimy Ridge had been tried many times by the attacking side but had never won, so this proved that if one German line can be broken, all can, so it was a kind of motivation to the Allies, that the fight ahead was not impossible. ...read more.

So when Vimy Ridge was broken, it encouraged everyone's motivation. Also, it was viewed as a great success because the Germans had fortified their trenches, so when the Allied troops recaptured it, the found wide and deep trenches. They found three main trenches, first was the first line trench, the second was the support trench, and the third was the reserve men, so once it was recaptured it was a massive advantage for the Allied troops. In conclusion the nature, origin and purpose, I feel that Source C has not been viewed differently, but was wrote for the pleasure of the public and to encourage them, that the war is near to an end, as this was the first attacking side battle within the war to succeed. Also I believe that it was written on the first day of the war, because the government felt that Vimy Ridge was theirs because of the great success the Canadian troops had. Secondly, Source D is an autobiography. The nature of Source D is that it is a soldier's memory of what happened during the war. So it can either be the success of the war and how he fought in the war or the tragedy of the mistakes of the war and how he lost close and personal friends. ...read more.

a one mans view and he's trying to share and tell people about his experience which was being told differently at the time of the war. W.G.Smith feels that the objectives at Vimy Ridge were not achieved, as the trench lines were not broken, but just pushed. Also Lens was not captured because it took so long for the Allied troops to come up the hill that the Germans managed to make some trenches and hide in the woods at the bottom of the hill. So W.G.Smith is not a liar, but his views are more to do with the main objectives of fighting Vimy Ridge. To finish with, both Source C & D are very good and reliable sources. Although there is one major difference between them, Source C focuses on the battle and how successfully the Germans were driven back where as Source D focuses on the aftermath and how long it took for the artillery to come up the hill and how Lens was not captured. Source C says what a splendid victory it was for the Allies, where as Source D complains that the prime objectives were not completed, so therefore it was a failed mission. Both Sources are viewed completely different, as Source C was too inform the public and boost morale, and Source D was meant for people who wanted to find out more about the war and success and failures. ...read more.