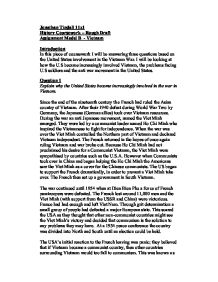 I will be looking at how the U.S became increasingly involved Vietnam, the problems facing U.S soldiers and the anti war movement in the United States.

Jonathan Tindall 11x1 History Coursework - Rough Draft Assignment Model B - Vietnam Introduction In this piece of coursework I will be answering three questions based on the United States involvement in the Vietnam War. I will be looking at how the U.S became increasingly involved Vietnam, the problems facing U.S soldiers and the anti war movement in the United States. Question 1 Explain why the United States became increasingly involved in the war in Vietnam. Since the end of the nineteenth century the French had ruled the Asian country of Vietnam. After their 1940 defeat during World War Two by Germany, the Japanese (German allies) took over Vietnam resources. During the war an anti Japanese movement, named the Viet Minh emerged. They were led by a communist leader named Ho Chi Minh who inspired the Vietnamese to fight for independence. When the war was over the Viet Minh controlled the Northern part of Vietnam and declared Vietnam independent. The French returned in the hopes of once again ruling Vietnam and war broke out. Because Ho Chi Minh had not proclaimed his desire for a Communist Vietnam, the Viet Minh were sympathised by countries such as the U.S.A. However when Communists took over in China and began helping the Ho Chi Minh the Americans saw the Viet Minh as a cover for the Chinese communists. The US began to support the French dramatically, in order to prevent a Viet Minh take over. The French then set up a government in South Vietnam. The war continued until 1954 when at Dien Bien Phu a force of French paratroopers were defeated. The French lost around 11,000 men and the Viet Minh (with support from the USSR and China) were victorious. France had had enough and left Viet Nam. Through grit determination a small group of people had defeated a major European state. This scared the USA as they thought that other non-communist countries might see the Viet Minh's victory and decided that communism is the solution to any problems they may have. ...read more.

"The tour of duty in Vietnam was one year. Soldiers were most likely to die in the first month. The large majority of deaths took place in the first six months. Just as a soldier began gaining experience he was sent home." Due to the desperation of the U.S armies search for troops many soldiers were sent over to Vietnam untrained and unprepared. Obviously this make life for them difficult because they are in an alien country fighting in conditions of which they have never seen before in their lives. Ironically, as the source states, after a while just as the soldier (those that survived anyway) gained experience in the jungle terrains his stay in Vietnam was over. "A rookie army was constantly throwing inexperienced men against experienced guerrillas on their home ground." The source was written in 1992, a full 19 years after the USA's part in the conflict had ended, so we cannot say it is a primary source of information. Also by 1992 it had been generally accepted that the USA had lost the Vietnam War. This was a huge surprise. Small Northern Vietnam with its guerrilla soldiers and peasants had defeated arguably the world's greatest major power. Something not admitted in January 1973 when (at the time) current President Nixon claimed the peace agreement between both sides as 'peace with honour' only for South Vietnam to fall to communism by 1975. What this means is that by 1992 there would have been longer to scrutinize the methods used by the US government, which would have discovered more faults and mistakes. This could have influenced the author into writing something a lot harsher on the U.S, than he would have done if South Vietnam had never fallen to communism. Question 3 Is there sufficient evidence in sources A to F to explain why there was an anti-war movement in the United States during the late 1960's and early 1970's? ...read more.

For the first time in history people were able to view the full terror of conflict from their living rooms. "Blood looks very red on the colour television screen." (Source E) This meant that many people, young and old, were able to view what was happening for themselves and not rely on what they are told by the government. People across America could watch Vietnamese children screaming in pain, they could watch American men brought off planes in body bags and all they had to do was turn on the television. Seeing something is a lot more influential than hearing it and many American realized this. Therefore it was not long until the anti-war movement began. "One wonders if a future democracy which had uninhibited television coverage in every home will ever be able to fight a war, however just." (Source E) Many American were also enraged at the fact that their government was spending money on the war that could go to their own homeless and dieing. All of these reasons meant that for the first time in America's history people spoke up against their countries actions in war and rebelled. Veterans returning from action were able to tell people what it was really like in Vietnam and spread the word that they did not want any more young Americans entering the war. (Source F) Americans all over at reports their soldiers were not experienced enough to be facing the Guerrilla soldiers of the Viet Cong and were obviously outraged. "An increasing number of recruits scored so low on intelligence tests that they would never have been let into the normal peacetime army." (Source A) Of course without the medium of television many people would not have developed anti-war feelings. What this means is that television is the biggest reason as to why there was an anti-war movement. "Blood looks very red on the colour television screen." (Source E) What this means is the by being up to date with current technologies the USA created it's own worst enemy in terms of propaganda and the protestors best friend. ...read more.