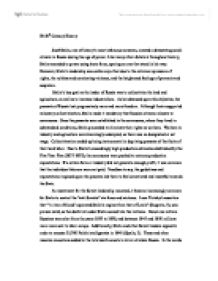 IB 20th Century History Josef Stalin, one of history's most infamous monsters, created a devastating social climate in Russia during his age of power. Like many other dictators throughout history, Stalin ascended to power using brute force, sparing no one that stood in his way. However, Stalin's leadership was unlike any other due to the extreme repression of rights, the ruthless and unrelenting violence, and the heightened feelings of paranoia and suspicion. Stalin's key goal as the leader of Russia was to collectivize the land and agriculture, as well as to increase industrialism. As he advanced upon this objective, the peasants of Russia lost progressively more and more freedom. Although Lenin supported voluntary collectivization, Stalin made it mandatory that Russian citizens relocate to communes. ...read more.

Leon Trotsky's assertion that "'a river of blood' separated Stalin's regime from that of Lenin" (Rogovin, 3), was proven valid, as the death toll under Stalin soared into the millions. About one million Russians were shot from the years 1935 to 1938, and between 1945 and 1950 millions more were sent to labor camps. Additionally, Stalin and other Soviet leaders signed to order to execute 25,700 Polish intelligentsia in 1940 (Qualls, 2). These and other massive executions added to the total death counts in terror-stricken Russia. In the words of Stalin in the year 1945, "The death of one man is a tragedy. The death of millions is a statistic," (Rogovin, 3). ...read more.

Also, when party members expressed even a slight hesitance about such policies as collectivism or the Five Year Plan, Stalin viewed the opinions as personal attacks. This resulted in a number of show trials and party purges, illuminating the paranoid and repressive ruling style that remained through his entire period of influence. The name Stalin, even today, provokes an image of repression and tragedy. However, it is important to study the distinction between these images that are common to those of a dictator and the true extent of Stalin's regime. Stalin implemented programs that eliminated the rights of the peasants, utilized unwarranted violence to achieve his lofty goals, and eliminated any supposed opposition at the slightest provocation. Stalin's rule over Russia was made distinct from any other dictatorial leadership because he took all of these things to an extreme. ...read more.