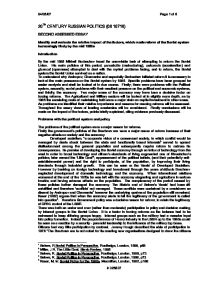 Identify and evaluate the relative impact of the factors, which made reform of the Soviet system increasingly likely by the mid 1980s.

20TH CENTURY RUSSIAN POLITICS (08 10718) SECOND ASSESSED ESSAY Identify and evaluate the relative impact of the factors, which made reform of the Soviet system increasingly likely by the mid 1980s Introduction By the mid 1985 Mikhail Gorbachev faced the unenviable task of attempting to reform the Soviet Union. His main policies of this period, perestroika (restructuring), uskorenie (acceleration) and glasnost (openness) attempted to deal with the myriad problems facing, and to reform, the Soviet system the Soviet Union survived as a nation. To understand why Andropov, Chernenko and especially Gorbachev initiated reform it is necessary to look at the main pressures on the Soviet system by 1985. Specific problems have been grouped for easier analysis and shall be looked at in due course. Firstly; there were problems with the Political system, secondly; social problems with their resultant pressure on the political and economic systems, and thirdly; the economy. Two major areas of the economy may have been a decisive factor on forcing reforms. The Agricultural and Military sectors will be looked at in slightly more depth, as by 1985 the escalating costs of maintaining both were a major drain on capital investment in other areas. As problems are identified their relative importance and reasons for causing reforms will be assessed. Throughout the essay views of leading academics will be considered. Finally conclusions will be made on the impact of the factors, points briefly explained, citing evidence previously discussed. Problems with the political system and policy The problems of the political system were a major reason for reforms. Firstly the government's policies of the Brezhnev era were a major cause of reform because of their negative effects on society and the economy. ...read more.

Sakwa argues that the Soviet Union had "become industrialised when the advanced countries were moving into the post-industrial era" 11, in which services, information flow and technology are more important than heavy industry. The failure of the Brezhnev administration to act upon this even after it became apparent was a major factor in reform being required, as it was necessary to invigorate the economy and industry to drive innovation in order to catch up with the west. Domestically, by the 1980s Soviet economy faced many problems exacerbated by poor central control. An example is the poor supply of consumer goods. It can be attributed to the Governments' failure to appreciate "the volume and process of supply and volume and direction of demand"12. State stores of products retained surpluses to supply state installations first in the event of shortage. Consumers always came last. This lead to a 'second economy' as Kaser (1981) describes it, a supply of consumer goods based on Theft, Speculation, Illicit production and corrupt purchasing. This in turn deprived the state of revenue, as currency was lost to corrupt citizens. As a factor this was important in causing reform as it was necessary to change the emphasis of the Soviet economy to light industry and technology to prevent this happening. By 1980 the Soviet economy was still biased towards Heavy industry and was producer, not consumer, driven. This hampered innovation as goods were produced to often obsolete or inappropriate specifications, as consumers were not considered as to what they wanted. The exception was in the military sector, which will be analysed in short order. A lack of competition found in free market economies further stifled innovation and development and left the Soviet Union technologically backward when compared to ...read more.

For example Social problems were mainly caused by dissatisfaction with the 'system' and were, it can be argued, a direct consequence of both misguided political decisions / policy and economic troubles. Sliianie (fusion of nations) resulted in yearning for national identity while over investment in Heavy industry resulted in a lack of consumer goods and a lower standard of living for the citizen. If the economy had been more developed and standards of living higher, would nationalist feeling against Sliianie and the sovietskii narod by non-Russian nations have been so high? It is true that strong negative feelings are often born from times of hardship, for example a rise in German anti-Semitic feeling after the defeat in the First World War, and usually directed at organisations / figures in authority. Would this have made reforms in demographic policy less necessary? It is those factors that damaged the economy so irreparably such as military overspending that had the most impact in affecting reform. These factors brought hardship to the everyday citizen, by resulting in problems such as relatively poor living conditions, lack of consumer goods, and food shortages. It can be argued that although eventually, political factors such as lack of participation would lead to disillusionment among the population, factors resulting from a weak economy that tangibly affected the citizen were more important in affecting reform. Kaser (1982) states "the economic problems of the 1980s...have an important political dimension" because, he argues, if an economy fails to produce for the average citizen, or causes the citizen to incur hardship, the legitamacy of the party to rule is called into question26. If the party lost its' legitamacy to rule and its' authority in the eyes of citizens it would surely be replaced. For this reason Economic concerns were the most important factor in affecting major reform of the Soviet system. ...read more.