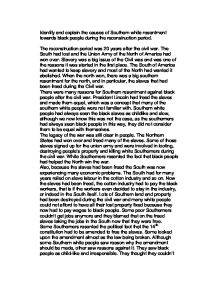 Identify and explain the causes of Southern white resentment towards black people during the reconstruction period.

Identify and explain the causes of Southern white resentment towards black people during the reconstruction period. The reconstruction period was 20 years after the civil war. The South had lost and the Union Army of the North of America had won over. Slavery was a big issue of the Civil was and was one of the reasons it was started in the first place. The South of America had wanted to keep slavery and most of the North had wanted it abolished. When the north won, there was a big southern resentment for the north, and in particular, the slaves that had been freed during the Civil war. ...read more.

White Southerners resented the fact that black people had helped the North win the war. Also, because the slaves had been freed the South was now experiencing many economic problems. The South had for many years relied on slave labour in the cotton industry and so on. Now the slaves had been freed, the cotton industry had to pay the black workers, that is if the workers even decided to stay in the industry, or indeed in the South itself. Lots of Southern land and property had been destroyed during the civil war and many white people could not afford to have all their lost property fixed because they now had to pay wages to black people. ...read more.