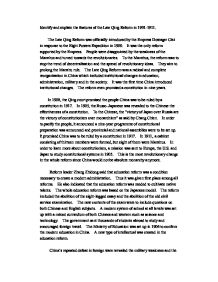 Identify and explain the features of the Late Qing Reform in 1901-1911.

Identify and explain the features of the Late Qing Reform in 1901-1911. The Late Qing Reform was officially introduced by the Empress Dowager Cixi in response to the Eight Powers Expedition in 1900. It was the only reform supported by the Empress. People were disappointed by the weakness of the Manzhus and turned towards the revolutionaries. To the Manzhus, the reform was to stop the trend of decentralization and the spread of revolutionary ideas. They aim to prolong the Manzhu rule. The Late Qing Reform was a radical and complete reorganization in China which included institutional changes in education, administration, military and in the society. It was the first time China introduced institutional changes. The reform even promised a constitution in nine years. ...read more.

Reform leader Zhang Zhidong said that education reform was a condition necessary to create a modern administration. Thus it was given first place among all reforms. He also indicated that the education reform was needed to cultivate native talents. The whole education reform was based on the Japanese model. The reform included the abolition of the eight-legged essay and the abolition of the old civil service examination. The new contents of the exam were to include questions on both Chinese and English subjects. A modern system of school at all levels was set up with a mixed curriculum of both Chinese and western such as science and technology. The government sent thousands of students abroad to study and encouraged foreign travel. ...read more.

National network of railways were to be built and capitalists were encouraged to set up their industries. China needed to increase national revenues. Beijing worked to develop branches of the central administration to increase its efficiency. Administrative reforms included establishing eleven new ministries to replace the old six boards. Unnecessary offices were abolished and sale of offices was prohibited. China needed to reform her judiciary since it was inhumanitation and not approved by foreign countries. A new commercial law was drafted and a new criminal code was adopted. Social reform contains institutional changes like intermarriage between Manzhus and China was allowed and foot-binding, slavery and opium-smoking was prohibited. This minimizes the discrimination of the Chinese. The Late Qing Reform was a radical reorganization included changes in many aspects. Unlike the previous reforms, China attempted to introduce institutional changes and constitutional reforms which were revolutionary to China. ...read more.