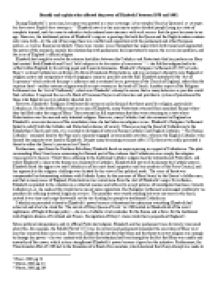 Identify and explain what affected the power of Elizabeth I between 1558 and 1603.

﻿Identify and explain what affected the power of Elizabeth I between 1558 and 1603. During Elizabeth I?s accession, her name was greeted as a true sovereign ?of no mingled blood of Spaniard, or stranger, but born mere English here among us.? [1] Elizabeth saw it as her mission to unite a divided people living in a state of complete turmoil, and she came to embody a truly national consciousness with such success that she gave her name to an age. However, the traditional picture of Elizabeth?s reign as a great age for both the Queen and the English nation contains only some truth ? by the end of her reign there was conflict and opposition with the parliament and other European powers, as well as financial instability. There were various issues throughout her reign which both waned and augmented the power of the monarch, namely her relationship with parliament, her expectation to marry, the succession problem, and the issue of England?s official religion. Elizabeth had sought to resolve the extreme hostilities between the Catholics and Protestants that her predecessor Mary had created. Both Elizabeth and Cecil ?held religion to be the matter of conscience? [2] ? she felt that religion had to be settled within England by dissolving papal and Spanish dominance. ...read more.

Elizabeth may have acted out of fear but her actions consolidated her position as Supreme Monarch. However, it was not only Catholics who threatened Elizabeth?s power in regard to religion ? the Puritans also had an impact. The threat to stability occurred because religious division could have undermined the stability of the 16th century at a time was government control was already fragile. It was clear that religious division and discord could cause rebellion. The government and the crown retained control through the nobility, and all of these ideas combined together to make the authorities fear what too much puritan influence within the church might lead to. Puritan ideas conflicted with those of the Church of England and would be unlikely to appeal to the majority; however, if the church structure had been further reformed among Puritan lines, the crown would have lost the significant control that it exercised via bishops. The puritans did not wane Elizabeth?s power because the existing governmental structures stopped an increase in puritan influence from occurring. It was not so much that the Puritan?s ideas were a threat, but rather that a fear of change and a reluctance to relinquish such important figures of authority made the puritans appear to be a threat to stability. ...read more.

4. Parliamentary pressure in 1559, 1563, 1566 and 1576 was strong, however so were Elizabeth?s methods of control. 5. The Queen delivered many speeches to the Commons stating that she would marry but she never did. In 1563, 1566, 1576 she told Parliament that, although for her herself she would prefer to remain the ?Virgin Queen? but for the sake of her subjects she would marry and produce a successor 6. Later attempts by parliament to secure the succession were connected with the desire to secure the exclusion of Mary Queen of Scots? ? the Privy council took the lead and applied pressure on the Queen through the commons and lords , bishops produced theoretical arguments and a committee of lawyers produced legal reasons 7. Elizabeth?s skill in her methods of parliamentary control meant that when her and parliament did clash the conflict never spiralled into an open struggle for power 8. As much as the privy council seemed to be working against Elizabeth on certain issues, it?s not true that the Council?s sole role was to oppose her ? they had the function of working with Elizabeth on certain issues in order to manage the commons ________________ [1] Fraser, 2000, pg.76 [2] Warren, 2008, pg. 81 [3] Warren, 2008, pg.109 [4] Haigh, 1998, ch.6 [5] Randell, 1994, ch.5 [6] Randell, 1994, ch.5 [7] Neale, 1953 ...read more.