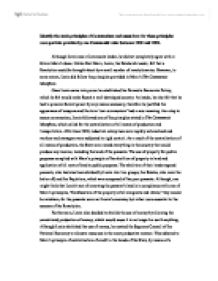 Identify the main principles of Communism and assess how far these principles were put into practice by one Communist ruler between 1900 and 1990.

Identify the main principles of Communism and assess how far these principles were put into practice by one Communist ruler between 1900 and 1990. Although Lenin was a Communist leader, he did not completely agree with or follow Marx's ideas. Unlike Karl Marx, Lenin, the Bolshevik leader, felt that a Revolution could be brought about by a small number of revolutionaries. However, to some extent, Lenin did follow the principles provided in Marx's The Communist Manifesto. Once Lenin came into power he established his Domestic Economic Policy, which he felt would make Russia a well-developed country. As leader, he also felt that he had to preserve Soviet power by any means necessary, therefore he justified the appearance of weapons and the term 'war communism' had a new meaning. ...read more.

Although, one might think that Lenin's act of removing the peasant's land is in compliance with one of Marx's principles, "Confiscation of the property of all emigrants and rebels," they would be mistaken, for the peasants were not Lenin's enemies, but rather were essential to the success of the Revolution. Furthermore, Lenin also decided to abolish the use of money by allowing the unrestricted production of money, which would cause it to no longer be worth anything. Although Lenin abolished the use of money, he created the Supreme Council of the National Economy to allocate resources in the most productive manner. This adhered to Marx's principle of centralization of credit in the hands of the State, by means of a national bank with State capital and an exclusive monopoly. ...read more.

He also accused those who refused to give their grains to the stationed units around the countryside, whose job was to assure that the peasants turned in their grains, as 'enemies of the people'. By removing the peasants of their surplus grains he created in them resentment, which was unleashed in form of a peasant revolution in 1921. The peasants began fighting the Red Army, who was there to represent the peasants, but also to take their grains. However, between 1921 and 1928, Lenin established a tax in which the peasants could now do whatever they wanted to do with their surplus. But this change came to late; the damage had already been done. Lenin's actions throughout his regimen were, as you can see, to some extent in compliance with the principles stated in Karl Marx's The Communist Manifesto. Although Lenin did not go about them as specified, these measures, are however, different in different countries and are generally applicable. ...read more.