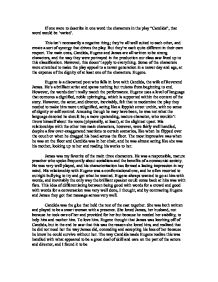 If one were to describe in one word the characters in the play "Candida", that word would be 'varied'. This isn't necessarily a negative thing; they're all well suited to each other, and create a sort of synergy that drives the play. But they're each quite different in their own respect. The main ones, Candida, Eugene and James are all written to be strong characters, and the way they were portrayed in the production our class saw lived up to this classification. However, this doesn't apply to everything. Some of the characters were stretched to make the play appeal to a newer generation in a newer day and age, at the expense of the dignity of at least one of the characters. ...read more.

Amusing though he may have been, he was not what the language denoted he should be; a more upstanding, mature character, who wouldn't throw himself about the room (physically, at least), at the slightest upset. His relationships with the other two main characters, however, were fairly well handled, despite a few over-exaggerated reactions to certain scenarios, like when he flipped over the couch or when he dragged his head across the floor. The most impressive was when he was on the floor and Candida was in her chair, and he was almost acting like she was his mother, looking up to her and reading his works to her. James was my favorite of the main three characters. He was a responsible, mature preacher who spoke frequently about socialism and the benefits of a communist society. ...read more.

Candida was the glue that held the rest of the cast together. She was both written and played to be a smart woman with a presence. She loved James, her husband, not because he took care of her and provided for her but because he needed her stability, to help him and mother him. To love him. Eugene thought that James was leeching off of Candida, but in the end he saw that this was the reason she loved him, and realized that he did not need her the way James did, conceding and accepting his loss of her because he knew he could survive without her. The way Candida made Eugene realize this was handled with what appeared to be a great deal of skill and care on the part of the actors and director, and I found it to be ...read more.