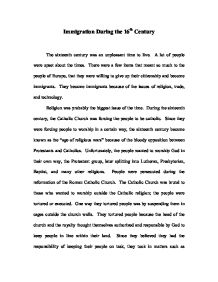 Immigration During the 16th Centruy

Immigration During the 16th Century The sixteenth century was an unpleasant time to live. A lot of people were upset about the times. There were a few items that meant so much to the people of Europe, that they were willing to give up their citizenship and become immigrants. They became immigrants because of the issues of religion, trade, and technology. Religion was probably the biggest issue of the time. During the sixteenth century, the Catholic Church was forcing the people to be catholic. Since they were forcing people to worship in a certain way, the sixteenth century became known as the "age of religious wars" because of the bloody opposition between Protestants and Catholics. Unfortunately, the people wanted to worship God in their own way, the Protestant group, later splitting into Lutheran, Presbyterian, Baptist, and many other religions. ...read more.

Another reason why Europeans decided to immigrate all over the globe was trade. A specific group of people, the Germans, moved around the world because of bad crops and local wars. Also, there was plenty of land to trade in the Americas, where land had yet to be claimed. Russians moved to southeast America. This was newly conquered land. To manage their newly acquired land, Europeans needed people to work their land as well. Since they were too lazy to do it themselves, the forced Africans to migrate to America with them. Another reason why people migrated to America was gold and silver. From early discovers such as Columbus to Spanish conquistadors bringing back gold to their homelands, thus producing a sudden rush of gold fever. "The English had commercial capitalism which had advanced to the point of English efforts at colonization being supported by private rather than government funds allowing English colonists to enjoy a greater degree of freedom from government interference (AP U.S. ...read more.

Ships were the biggest set of technology of the time, getting people to Canada, America, and other parts of the world. Around 1500, Asian civilizations had invented most of the technology that Europeans used to navigate the oceans. Other inventions that prospered throughout the sixteenth century were gunpowder, the magnetic compass from China, and lateen sails invented by the Arabs. The immigration for religion freedom, trade, and technology overall did wonders for the new colonists, but this decision had its ups and downs. Sure, most people that migrated had good crops and made money, but there were some consequences. Some left friends and family back in Europe. They also had to adjust to the new diseases that came with moving to a new land. Another consequence was dealing with the Natives that already lived on the land, having to sometimes fight for control of land. The immigrants prospered due to trade in their new land. They also enjoyed religious freedom, free from persecution. ...read more.