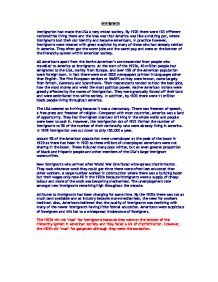 Immigrants Immigration had made the USA a very mixed society. By 1920 there were 103 different nationalities living there and the idea was that America was like a melting pot, where immigrants lost their old identity and became Americans. In practice however, immigrants were treated with great suspicion by many of those who had already settled in America. They often got the worst jobs and the worst pay and were at the bottom of the hierarchy system within American society. All Americans apart from the Native American's are descended from people who travelled to America as immigrants. At the start of the 1920s, 40 million people had emigrated to the USA, mainly from Europe, and over 15% of the American population were foreign born. ...read more.

In addition, by 1920 there were 11 million black people living throughout America. The USA seemed so inviting because it was a democracy. There was freedom of speech, a free press and freedom of religion. Compared with most countries, America was a land of opportunity. They had the highest standard of living in the whole world and people were keen to cash in. However, the Immigration Act of 1921 limited the number of immigrants to 5% of the number of their nationality who were already living in America. In 1929 immigration was cut down to only 150,000 a year. Around 5% of the American population were unemployed at the peak of the boom in 1929 as there had been in 1920 so these millions of unemployed Americans were not sharing in the boom. ...read more.

The unemployment rate amongst new immigrants remaining high throughout the decade. Attitudes to immigrants had been changing for some time. By the 1920s there was not as much land available and as industry became more mechanised, the need for workers declined. Also, Americans believed that the quality of immigrants was declining with many of the newer immigrants having little formal education. Americans were suspicious of foreigners and this led to a widespread intolerance of foreigners. The 1920s did not 'roar' for immigrants because they were at the bottom of the hierarchy system in American society and they faced a lot of discrimination. However, the 1920s did 'roar' for gangsters although they were the exception. ...read more.