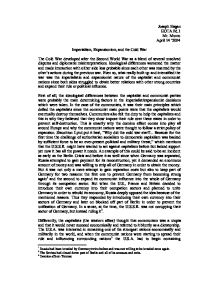 Imperialism, Expansionism, and the Cold War

Joseph Hagan HOTA Pd.1 Mr. Munro April 14 '2004 Imperialism, Expansionism, and the Cold War The Cold War developed after the Second World War as a blend of several unsolved disputes and diplomatic misinterpretations. Ideological differences worsened the matter and made interaction with either side less probable since each other was resented by the other's actions during the previous war. Even so, what really built up and intensified the war was the imperialistic and expansionist nature of the capitalist and communist nations since both sides struggled to obtain better relations with other strong countries and expand their rule or political influence. First of all, the ideological differences between the capitalist and communist parties were probably the main determining factors in the imperialist/expansionist decisions which were taken. In the case of the communists, it was their main principles which defied the capitalists since the communist main points were that the capitalists would eventually destroy themselves. Communists also felt the duty to help the capitalists and this is why they believed that they show impose their rule over these states in order to prevent self-destruction. ...read more.

Differently, the capitalists (the western allies) thought that communism was a utopia and that it would never succeed economically and referred to it bluntly as a dictatorship. The U.S.A. was interested in remaining one of the strongest nations economically and militarily in the world, and when the communist nations were starting to spread their rule and influencing surrounding nations3 the U.S.A. had to begin containing communism. If not, the communist nations would have been an impediment for the U.S.A.'s ambitions since communists thought as if benefiting the working class while the U.S.A. thought of free trade and capitalism in general (U.S.A. was forcing communist nations to follow its policies which is somewhat imperialistic). Besides, the past wars in Europe had opened the doors to international trade for the United States with other countries. If communism spread, then many of these ties would probably be lost and that is why policies such as the Truman Doctrine of March 22, 1947 and the Marshall plan of April 3, 1948 were signed. Once again, through imperialistic reactions, the U.S.A. ...read more.

The U.S. criticized the Soviets for being in charge of the assault in Korea and tried to accuse them of instructing Kim Il Sung to attack South Korea. Once again, the relations between capitalist countries and communist nations were damaged even more. In conclusion, the main reason why the Cold War escalated so quickly into a great conflict was that the expansionist and imperialistic nature of capitalism and communism caused misinterpretations and exaggerations by each side. Communist countries such as the U.S.S.R. had a strong expansionism policy since they thought it was their duty to "guide" other countries while capitalists thought that communism would hamper with their economy if they were let to expand freely. 1 Russia had been invaded by Germany twice before and was not willing to be invaded once again. 2 The Soviets had closed down part of Berlin and all of its accesses and exits. 3 Domino effect- Truman 4 Most of Europe had been secured by the U.S. and other allied powers, thus the U.S.S.R. had to rely to Asia in order to find support from other countries. ...read more.