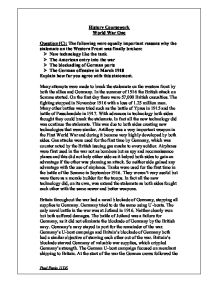 Important reasons why the stalemate on the Western Front was finally broken.

History Coursework World War One Question (C): The following were equally important reasons why the stalemate on the Western Front was finally broken: > New technology like the tank > The American entry into the war > The blockading of German ports > The German offensive in March 1918 Explain how far you agree with this statement. Many attempts were made to break the stalemate on the western front by both the allies and Germany. In the summer of 1916 the British attack on Somme started. On the first day there were 57,000 British casualties. The fighting stopped in November 1916 with a loss of 1.25 million men. Many other battles were tried such as the battle of Ypres in 1915 and the battle of Passchendale in 1917. With advances in technology both sides thought they could break the stalemate. In fact all the new technology did was continue the stalemate. This was due to both sides creating new technologies that were similar. Artillery was a very important weapon in the First World War and during it became very highly developed by both sides. ...read more.

The Russian campaign in the war was important on the Eastern Front for many reasons. It caused the German army to be split, which had to fight on two fronts, which weakened the German army fighting the British and French forces on the Western front. However In 1917 the Russian revolution took place. The new Russian government asked for peace with Germany, which would have meant that Germany, could focus it's entire strength on the Western Front. Also in 1917 the Americans finally joined the war on the side of the allies. The American involvement was the result of a number of issues. Firstly, Germany's unrestricted submarine warfare led to numerous ships being sunk leading to the loss of American lives. The Lusitania sinking was the prime one in which 128 Americans had died. The second reason for the American involvement was the "Zimmerman telegram". Zimmerman was the German Foreign Minister, who sent a telegram to Mexico but Britain intercepted it. The telegram asked Mexico to attack USA and said that Germany would help with the supplies. Britain passed this news to the Americans, which finally led to the Americans declaring war on Germany on 6th April 1917. ...read more.

At the start of November 1918 things had gone from bad to worse for Germany because Britain's blockage of Germany was working, as thousands of German civilians were now close to starvation. Even though the Army had launched the offensive in Spring 1918, following the end of war on the Eastern front, expecting big successes they certainly did not realise that the allies now would be hitting them back with fresh American troops and new tanks to help the Allies. By October 1918 things were so bad for Germany that the German Navy mutinied. Daily there were heavy losses on the Western Front and with defeat almost certain the German people wanted a stop to the war. This nearly led to a revolution in Germany and the Kaiser was forced to abdicate and two days later Germany had no choice but to call for an armistice. All the German plans and attacks had failed at about the same time, which finally led to the German people, who were starving due to the British blockade, to call for an end to war. All this led to the German request for an armistice, finally ending the First World War. Paul Punia 11DS ...read more.