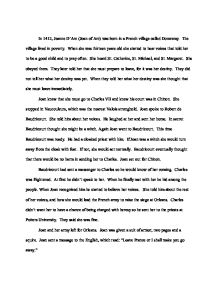 In 1412, Jeanne D'Arc (Joan of Arc) was born in a French village called Domremy.

In 1412, Jeanne D'Arc (Joan of Arc) was born in a French village called Domremy. The village lived in poverty. When she was thirteen years old she started to hear voices that told her to be a good child and to pray often. She heard St. Catherine, St. Michael, and St. Margaret. She obeyed them. They later told her that she must prepare to leave, for it was her destiny. They did not tell her what her destiny was yet. When they told her what her destiny was she thought that she must leave immediately. Joan knew that she must go to Charles VII and knew his court was in Chinon. She stopped in Vaucouleurs, which was the nearest Valois stronghold. Joan spoke to Robert de Baudricourt. She told him about her voices. ...read more.

They said she was fine. Joan and her army left for Orleans. Joan was given a suit of armor, two pages and a squire. Joan sent a message to the English, which read: "Leave France or I shall make you go away." Orleans had been under attack since the autumn of 1428, and it was vital to Charles's cause for it was a very important city. The English surrounded Orleans. Through the siege, the French were still allowed through the main gate. Joan and one half of her troops marched in with food and ammunition. The rest of Joan's troops were out beyond the sight of Orleans. The English set out for reinforcements. Because of this, the French attacked. They went out for the rest of the troops. They marched toward the castle, climbed the walls, and fought the English. ...read more.

Charles later realized that the Burgundians tricked him and were preparing to attack Compiegne. Charles immediately sent Joan to protect the people of Compiegne. Joan's voices spoke again and told her that she would soon be captured. She went to Compiegne, and while fighting, she was pulled off of her horse by a Burgundian archer. The Burgundians feared that the French would stop at nothing to get her back, and he also knew that the English would want her sold to England for ten thousand gold crowns. The English held trial because they wanted to prove that Charles was working for the Devil. They interrogated Joan with nonsense questions. Joan replied only in truth, and only what her voices told her she was allowed to tell. Joan was found guilty and would be burnt at the stake as soon as possible the next day. When she was burning, King HenryVI secretly wrote: "We are all lost, for we have burnt a good and holy person. ...read more.