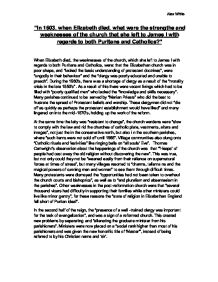 In 1603, when Elizabeth died, what were the strengths and weaknesses of the church that she left to James I with regards to both Puritans and Catholics

Many protestants were dismayed the "opportunities had not been taken to overhaul the church courts and bishoprics", as well as to "end pluralism and absenteeism in the parishes". Other weaknesses in the post-reformation church were that "several thousand vicars had difficulty in supporting their families while other ministers could live like minor gentry", for these reasons the "state of religion in Elizabethan England fell short of Puritan ideal". In the second half of the reign, the "presence of a well-trained clergy was important for the task of evangelization", and was a sign of a reformed church. This created new problems by separating and "alienating the graduate minister from his parishioners". Ministers were now placed on a "social rank higher than most of his parishioners and was given the new honorific title of 'Master'", instead of being referred to by his Christian name and 'sir'. ...read more.

Finally court records suggest that the laity was showing a "greater readiness to attend church regularly during the last years of Elizabeth's reign". This presumably indicated the "acceptance of the protestant message in the sermon and liturgy". England in 1603 could be described as "undoubtedly a protestant nation", despite the continuation of superstitions and the "rudimentary understanding of doctrines". In conclusion, when Elizabeth died, in 1603, there were more weaknesses than strengths of the church that she left to James I, as the clergy were ungodly in their behaviour, places were filled with under qualified men lacking in knowledge and skills, Marian Priests, who did their best not to spread Protestant ideas and teachings, and that graduate ministers were given the title of master to separate them from their parishioners. Whereas they did manage to achieve a new framework for worship, bring about deep anti-papalism and iconophobia, and brought about the acceptance of the protestant message in sermons. ?? ?? ?? ?? Alex White ...read more.